One of my most cherished memories from my export sales tenure with Malvern was traveling with one of my favorite distributors, Glen Blackstock. Glen used to head up our representatives in South Africa, Micron Scientific. I’ve always thought it funny that a unit of measurement was named after Mike and Ron.  It could have easily been the ‘ronmike’ except that alphabetical order took over!

I quickly became good friends with ‘ol’ carrot top’ as he was affectionately known (by me) and we would save company hotel and other expenses by staying in each others homes during visits.  That’s when you know you’ve ‘arrived’ with a supposedly formal ‘business’ contact.

A business trip to Namibia via Glen’s Land Rover complete with wife Karen and two wonderful children (son, Trevor and daughter, Mallory) was an adventure that anyone would have paid serious money to partake in.

To Winhoek, Namibia via Botswana

We set off in the afternoon via an interesting border crossing into Botswana – where we spent the night.  The next day we were up early to cross into Namibia by land and travel across the Kalahari and onto Windhoek, the country’s capital.

It’s impossible to describe the beauty of this area. Namibia is a fascinating unspoilt country that I’d recommend to anyone. It’s the old German South West Africa and German is still extensively spoken as we were to find out.  Near the General Post Office in Windhoek there are whole pieces of the famous Gibeon meteorite. Our intention was to take in three business visits, one of which was to a uranium plant. Then we were to head up to Etosha National Park via Tsumeb for the weekend.  On the way, we stayed at a game lodge called Schoenfeld near Kalkfeld (German for ‘Chalk Field’) in the north of the country and within driving distance of Tsumeb and Etosha. 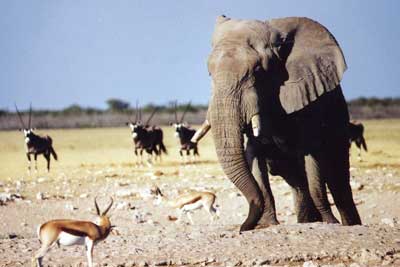 Schoenfeld is fantastic and run by the impressively named and friendly Hartwig von Seydlitz .  A neighboring farm has a small old skarn mine and I was able to pick up samples of chalcopyrites, pyrites and magnetite, and get thorns in all my clothing. I also observed a strange twig that, when put in water overnight, miraculously grew into a bush with leaves!

It’s impossible to satisfactorily describe all the wonderful events here; the joy of sleeping on the roof of the Schoenfeld accommodation watching the stars and satellites with the clearest skies imaginable.  We were able to visit the site of Hoba, the world’s largest meteorite. 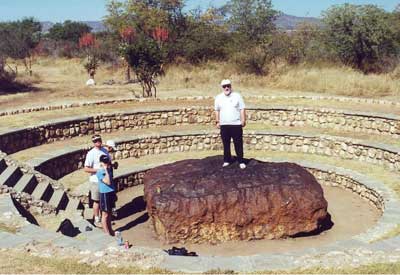 After seeing rhinos, guinea fowl, giraffe, meercats, cheetahs, elephants, lions and all manner of wonderful things at the game reserve, we made our way to Tsumeb.

Tsumeb is a revered name in geological and mineral collecting circles.  It is THE place for many of the rarest and best looking mineral specimens in the world.  There’s so much history that I can’t begin to cover it. I can however recommend the Tsumeb II book on minerals by Georg Gebhard. I have a prized leather copy, personally signed by author.

This location is particularly renowned for its lead minerals (cerussite and anglesite in particular), copper minerals (dioptase), zinc minerals (cobaltian smithsonite is one specialty) and even germanium minerals.  Although the mine is long closed, the museum shows wonderful specimens and a mineral shop or two is still open together with the local street vendors and hawkers selling some impressive (ill-gotten?) gains.

Eventually I had to wrench myself away from the delights of Tsumeb and I had a ride back to the capitol with an official Windhoek game-warden, leaving Glen behind to enjoy a longer stay. I, however, had a flight back to London to catch.

I did have time to buy some more minerals in a local Windhoek shop, find out that I couldn’t pack them into my suitcase, buy an extra suitcase, and then find out that my excess baggage of minerals was to cost me a huge chunk of change. Ah well, I told myself it was worth it for the museum specimen of dioptase alone! (see main image)