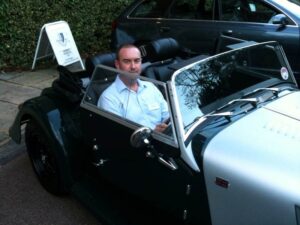 Ben Rawles, Embedded Software Engineer within NPI and specialist in Microviscometry also attended the talk. ‘Not only was there an opportunity to sit in a Morgan’ said Ben but the talk by Jon Wells was inspiring. There were over 80 young people in the hall ranging from 14 years to 18 who learned that the Morgan Motor Company is still a family owned business with 170 employees.

Morgan is all about reputation and their promise to deliver a quality product, they pride themselves on their skill to listen to the customer …. a lesson we should all heed. As Senior Designer Jon confessed he spent much of his time sketching, not necessarily cars, sketching anything which takes his eye (he quoted aeroplanes, fashion and women as examples!) and which, can often lead to new ideas being conceived. Jon explained that although the cars are still manufactured in a very traditional manner, they use modern design tools such as 3D modelling software and wind tunnels.

Once the talk had finished, questions were taken from the pupils and I was amazed at how challenging and thought provoking they were. Others caused him to blush such as “How do you make a profit – do you just sell the cars for loads more than it costs to make them?” to which he simply replied “Erm, yes”.

After the talk, there was an opportunity to meet with the speaker and some of the pupils. Jon was keen to know more about Malvern Instruments so Ben was able to inform him on what we did.