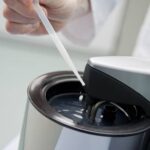 Why is sampling such an issue in particle sizing?

Why can’t I find a small amount of large material in my sample especially by microscope or image analysis?

Why do I get sample-to-sample variation especially in the large end of the particle size distribution?

This is expensive so we want to supply only 1 mL to a company for particle size analysis.

The table below shows the huge effect that these small numbers of large particles have on the volume or mass distribution.

To all intents and purposes, the total distribution in our example has a number mean  for the sample and any sub-samples of 1 µm.  The mass, volume or value ($) distribution has the following possibilities:

However, if we divided the sample into 20 X 1 mL portions none of the samples could be representative of the whole.  Most (at least 18) would have none of the 2 large particles in them and would therefore be unrepresentative.  The samples or sample (if the 2 particles find themself in one vial) that did contain the large particles would not be representative of the whole.  This type of scenario (small sample from large sample mass) is the standard practice in most industries.

It’s the largest particles (and the small numbers there of) that contribute to the mass statistics.  Mass or volume is usually the same as value ($) as most products are sold or processed on the basis of mass or volume not number.  The standard error (estimate of the ‘trueness’ of the sampled mean in relation to the true population mean) is proportional to 1/√n where n is the number of particles sampled and the closer we get to the top end of the distribution (the largest particle is the x100) then the smaller the number of particles and hence the greater unreliability of prediction in this top end area.

The importance of the largest particles in sampling statistics has been recognized since the 1880’s and the webinars on Brunton, Reed, and Richards indicate the impact these fascinating individuals had in sampling theory where those small numbers of large particles become very important.