The one thing about Pittcon is the huge amount of giveaways and technical literature given away by exhibitors.  And the gimmicks to pull people into the stand…..  The Pittcon bag is a given – this year a beer/soda cooler: 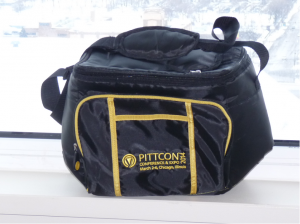 The amateurs at Pittcon are easy to spot – they’re carrying huge amounts of information and other items in the numerous canvas promotional bags.  Pens are the norm – Malvern’s “Guess the number of particles in the candy jar” promo has a particularly nice pen – a high powered light one end and a soft other end for touch screen devices such as iPads and iPhones. However, there are squeeze toys, wooden tulips, posters, and so much else too numerous to mention…  Come onto the Malvern stand (# 1648) and guess the number of particles and get your pen!

The Chromeleon prowls the Pittcon stands waving – and just looking for a rugby tackle to bring it to ground.  In our part of Massachusetts there’s be a hunting season on Chromeleons (just after powder/blunderbuss season) and it would have be extirpated long ago.   Anyway if you need to know it’s promoting the Thermo Scientific HPLC-MS/MS system… 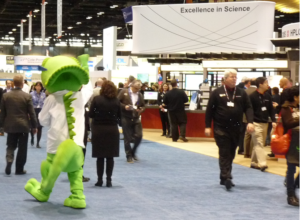 The other feature of Pittcon is the daily magazine, Pittcon Today, or advertising blurb, but it does contain interviews with leading scientists that have won prizes at Pittcon and other interesting material.   Always worth reading but also available electronically with the needs of modern times… 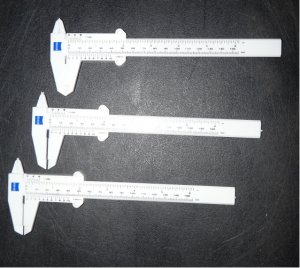 My favorite giveaway (and I have to admit I’ve seen them before in Switzerland) is a vernier from Zeiss.  I’m a sucker too and picked up 3 from their stand.   However, I was really touched when one of the attendees at my sampling short course on Saturday morning came to visit the stand.  He’s come all the way from Obama’s birth state (if you believe it!), Hawaii (another participant had come from Saudi Arabia).  He had bought a gift of Hawaiian coffee for me….. Now that was very kind.  Thank you, Ken Tenno of the Water Quality Laboratory, Honolulu for both the coffee and for attending the course…… Now I’ll have to take that coffee in and out of Brazil!

And the weather – still cold…  Note the particle size standards on the right: 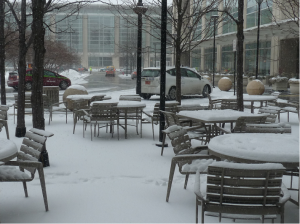 You can read The Pittcon Diaries: Part 1 here.