Malvern Rocks Your Socks Off

The Malvern Instruments’ offices in the UK & the US (Westborough) entered into a “friendly” competition earlier in the month to raise money for autism charities. April is World Autism Awareness month, so Catherine Egan from the Malvern UK office felt it would be the perfect time to lend our support to autism charities.

Catherine rallied the folks in the UK office – who are always ready to embarrass themselves for a good cause – to join in with “Silly Sock Day”, urging them to make a charitable donation for the privilege of wearing their silliest socks to work.

When Kristen Wilkinson in the US office heard about the fundraising event, being the enthusiastic and competitive person that she is, she decided that not only would the Westborough team participate in Silly Sock Day, but that they would have SILLIER socks than the UK and would raise more money!

The gauntlet was thrown down! The battle commenced! Who would wear the most “out there” socks, and who would raise the most money? Cue a barrage of colourful emails, poems, and “smack talk” as Catherine & Kristen drummed up support for the rivals teams. 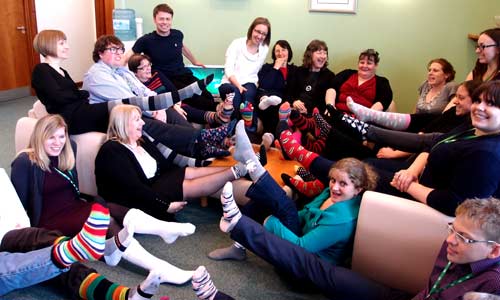 …but could they beat the UK team’s Silly Sock efforts?

While the UK raised the most money overall (£112 versus $120), the prize for silliest socks has to go to Dr Alan Rawle, who donned a spectacular pair of sock “earrings.” 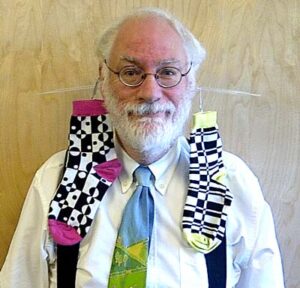 Congratulations to Alan – his legendary inventiveness won out yet again.

I hear that Kristen was very sad to have missed out on the fun on the day, as she had a fabulous pair of socks that looked like pencils at the ready – we shall look forward to that treat next year.

Thanks to all those who so enthusiastically sported their silliest socks; money raised goes to Autism Anglia & Austism Speaks.

I’ll finish with a poem Catherine penned to celebrate our success:

Silly Sock Day had finally arrived,
At Malvern UK no feet were deprived,
Westborough threw down a smelly sock gauntlet you see,
So to all our employees, we sent out a plea,
‘Wear those silly socks with pride, we asked,
Raise money for Anglia Autism and have a blast!
Malvern team spirit on the day was displayed,
With socks old and new and some even handmade,
Our Silly Sock feet, we’re delighted to tell,
Raised over £112 ,which we think is swell!