Last week, Malvern’s Year in Industry placement students hopped over to the Three Counties Showground to whet the appetites of the next generation of potential scientists and engineers. The Malvern Festival of Innovation’s Next Generation Innovators event aimed to showcase creative science, innovative technology and business entrepreneurship to secondary school children from around Worcestershire.

Two of our Year in Industry students who manned the Malvern stand -Tammy Liu & Yann Van Crombrugge – offer their thoughts below on their placements & their experience at the Next Generation Innovators day.

I am an undergraduate electronic engineer working in Malvern’s New Product Introduction (NPI) team. It was a fortunate coincidence that I met Wendy Milne-Bennett, Malvern’s Director of HR, at the Women’s Engineering Conference which is where I discovered Malvern Instruments. All these precise particle measurement instruments, from the nano to the micron scale, excited me.

I spent three months in Malvern Instruments for a summer placement last year working on ADC interface design and testing. The friendly working atmosphere and the exciting projects encouraged my enthusiasm to continue working for the company.

I was lucky enough to be able to come back for another half year industrial placement working on FPGAs, which relates to my Masters’ degree at the University of Edinburgh. FPGA is short for field-programmable gate array which is an integrated circuit designed to be configured after manufacturing. Its configuration is generally specified using a hardware description language (HDL) such as Verilog and VHDL.  My current project here is working on an FPGA based temperature controller, which will be used in a couple of different instruments.

Our main aim for the Next Generation Innovators day was to spark the children’s interest in new technologies, and to encourage invention and innovation. I configured an FPGA especially for the event which was designed to play the snake game found on ancient Nokia phones. This was a runaway success with many kids queueing up to try the game. We even had a leader board and a young boy from Stourport School managed to beat my personal high score! Thankfully, I had pre-emptively programmed the game to last 2 minutes. Otherwise, the queues would have been endless!

I was really happy to attend this event which encouraged future engineers and scientists. By answering their questions, I felt I was helping them to acquire knowledge and an interest in innovation.  One of the kids even asked for my email address and wanted to learn more details about the snake game design, which was very gratifying. 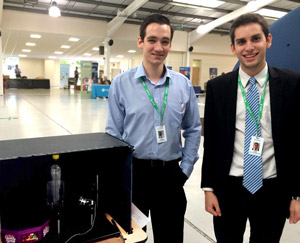 I am currently working with the NPI Micrometrics team.  I heard about Malvern Instruments via my University Careers officer. After some quick initial research, I realised that joining Malvern for a placement would be great opportunity for me to gain some valuable experience in a niche market. Additionally, after the somewhat emphatic glorification of the Mastersizer by one of my lecturers, I was further convinced to send in my application.

At the moment I am working on Micrometrics’ newest project, a new accessory for the Mastersizer. I will be trying various samples with this new accessory to pick out any bugs in the software or hardware.

I only started working at Malvern Instruments two weeks ago and therefore only joined the preparations for the Next Generation Innovators event at quite a late stage. Ryan Edwards, from the NPI nanometrics team, put together a simple apparatus to enable us to demonstrate the basic principles of Laser Diffraction – this is the measurement technique used in our Mastersizer range of particle size analyzers. While most of the kids were preoccupied with the wonderful snake game Tammy developed, we did manage to create a decent crowd in front of the laser diffraction demo.

The laser diffraction experiment involved a laser passing through water bottles. When the bottle contained only water, the laser could not be seen.  Once various contaminants were added to the water – milk, coffee & cola – the scattering of the light could be observed. This is because the particles in the contaminants reflect a small portion of the light in the direction of our eyes, enabling us to see it.

We had also punctured holes in each of the bottles used during the demo and sealed them using a dowel. Once the laser was aligned with the hole and the seal was removed, it could be observed that the light from the laser bent with the small stream of water 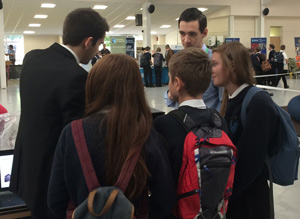 This particular trick did wow the crowd, and also sparked a lot of questions. Many kids did not understand why there was a fluctuation in the rate at which the water exited the bottle when the seal was removed. Others asked why the light bent with the water. There were also two or three future engineers who managed to answer these questions without any guidance!

All in all, this fruitful experience allowed me to learn how to connect with younger kids to try and get them interested in science and engineering. It definitely taught me how important a thorough understanding of the topic was when it comes to explaining science to inquisitive children! It was also interesting to observe the different techniques used by other companies at the festival, to attract the children’s interest and to inspire the kids. There were certainly key success factors which we can implement at the Malvern Instruments stand next year.

The Next Generation Innovators was just one of the events put on by the Malvern Festival of Innovation – Malvern Instruments also took part on the Advanced Engineering & Manufacturing exhibition and symposium. Check back later to read more from Sarah Macdonnell who gave a talk about the impact of additive manufacturing (otherwise known as 3D printing) on design at Malvern.

On Yer Bike! Tour of Britain Comes to Malvern