Getting in a frightful stew!

Boo!  Did you guys miss me?  It’s Kristen Wilkinson, your faithful Malvern Instruments reporter of all things fun and charitable over here in Malvern Americas HQ in blustery Westborough, Massachusetts.  Sorry for my blogging hiatus- this pesky thing called “marketing work” got in the way! 🙂

Last Friday was Halloween and you already know it’s one of our favorite holidays to represent in the office.  Last year we had a chili cook-off and this year we turned it into a stew cook-off.  I got last place (womp womp) in the chilli (something I cook on the regular) competition, so I was DETERMINED to make a comeback for stew (something I have never actually cooked before)!  Was I successful?

Well, not for my costume.  Last year I took home the glory of 2nd place in the costume category- check out last year’s blog post to re-live the creative costumes (especially the dapper lion J ).  This year I put so much effort into my stew that my costume. . . wasn’t so great.  I was a Malvern Jack-in-the-Box.  Unfortunately, a couple days before Halloween my puppy decided to make sure the box I decorated was good, so I was missing a few corners.  Whoops!

We had a fantastic turnout of Malvern employees dressing up in attire that we don’t see them in normally (minus Bob Feczko- he’s always just chillin’).  We had pirates, nuns, demons, Dia de Los Muertos sugar skulls, energy drinks, prison inmates, “that guy” at a beer festival, a mime, Little Bo Peep, and so much more!  Winners with some super awesome costumes were as follows: 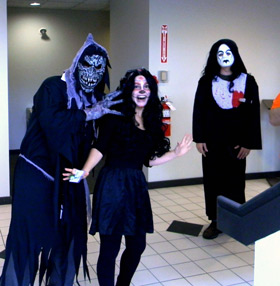 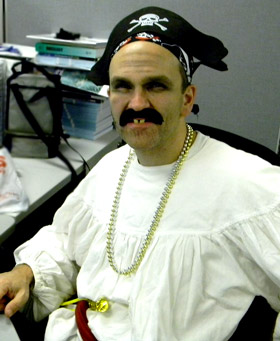 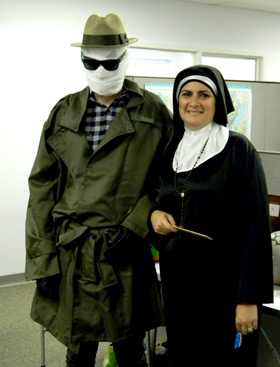 Our office in Maryland (home to the Bioscience Development Initiative) also got into the festivities and sent us pictures of their costumes.  Even the dogs dressed up! 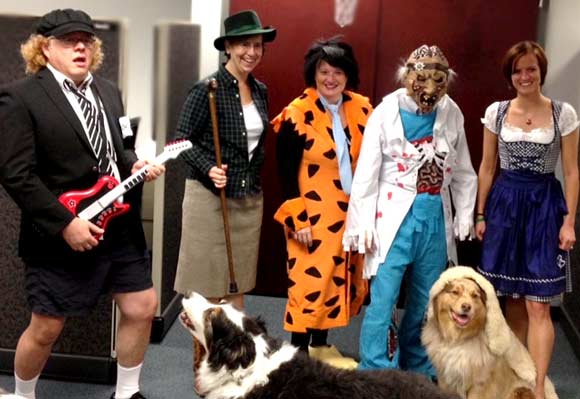 I am excited to announce that we have chosen a WINNER for the BDI office costume competition- Neil Lewis!  Scary interpretation of Angus Young… Neil, do you moonlight at another job that we don’t know about??

We had a really creative group of cooks competing with beef stews that ranged from traditional to quirky; Spectris maven Sunny brought in a southern inspired stew with chicken and pork, okra, beans, and a lot of other cool ingredients.  Josie (dressed as Wonderwoman), last year’s reigning chili champion, brought in a beef stew that was what I describe as a rustic traditional take and made it fancy by garnishing it with fresh parsley.  Kevin from our BDI group brought in his famous southern-inspired spicy beef stew with his signature ingredient: corn.  Marisa (dressed as a nun) brought in a beef stew that smelled fantastic and eerily similar to my Spanish madre’s cooking (so good, in fact, that her husband stole a bowl to bring to work!).  I took a risk and made a recipe I found randomly online of a Spanish Chilindron stew with veal, roasted red peppers, onion, bacon, and mushrooms (all cooked in a lot of yummy red wine). 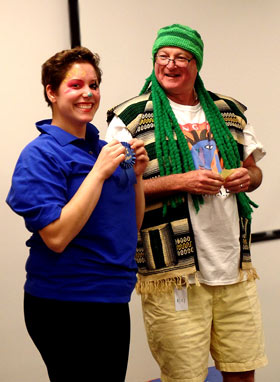 I went from worst to FIRST!  Intrigued by my Chilindron stew?  Here’s the recipe I followed: http://honest-food.net/2011/10/02/spanish-chilindron-stew/

We all had so much fun at the office, I think we are all counting down the days until Halloween 2015. What should we cook in our competition next year?! You can let us know via Linkedin, Twitter or Facebook.