It’s Pittcon time again, and it wouldn’t be Pittcon if we didn’t go contest crazy!  This time we’re spoiling you with two separate ways to win some goodies. 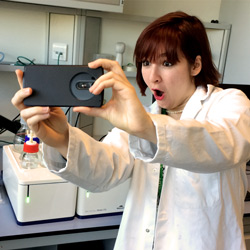 If Twitter is your thing, we have a fun contest for you to try your hand (or your face!) at.  Starting from Monday 9th March, head over to the Malvern Instruments booth – number 3545 – at Pittcon and take a photo of yourself with one of our instruments.  Send your selfie on Twitter to @malvern_news with the hashtags #MalvernSelfie and #Pittcon2015 on Twitter for the chance to win a $100 Amazon giftcard.

Not made it to Pittcon this year?  No problem – if you own or use a Malvern system, the good news is that you can still join in with the contest.  Just take a pic of yourself or your lab mates with your Malvern and share that instead.  The contest runs from 9a.m. on March 9 2015 until 3 p.m. on March 12 2015 and we’ll select our favorite photo once Pittcon is over on Friday 13th March, so plaster on your cheesiest grin, your poutiest pout, or your best ‘this is very serious science’ face and snap away (see full terms below).

While you’re at the booth taking your #MalvernSelfie, don’t forget to enter our other contest! If you’re up to the challenge, we’re asking you to guess how many ‘particles’ are in the jar – well, to be honest, this is NOLA so the ‘particles’ are really shiny beads, with a few extra surprises thrown in there for good measure.  The person who guesses closest to the actual number will win a $500 Amazon gift card, so it’s well worth heading over the the Malvern booth, 3545, to make your guess.

Look out for our two brand new systems on display which are designed to solve your protein and polymer characterization woes. You’ll be able to get up close and personal with OMNISEC, our shiny new multi-detector SEC/GPC system, and PEAQ-ITC the new Isothermal Titration Calorimetry system from MicroCal launched just this week!  Both instruments have a really sleek modern design, so could prove to be the perfect partner for your #MalvernSelfie!

3. Tweet the photo to @malvern_news with the hashtags #MalvernSelfie & #Pittcon15

Entrants into the Prize Draw shall be deemed to have accepted these Terms and Conditions.

Employees or agencies of Malvern Instruments, its group companies or their family members, or anyone else connected with the contest may not enter the contest.

The contest is open to people aged 18 and over.

To enter, each contestant must take a photograph of themselves with their favorite Malvern system at Pittcon 2015 or with your Malvern system in the lab.

Participants may enter only a maximum of one picture each day of the contest.

Entries on behalf of another person will not be accepted and joint submissions are not allowed.

One winner will be selected from all eligible entrants who post pictures in accordance with the above instructions.

Malvern Instruments accepts no responsibility for any costs associated with the prize and not specifically included in the prize.

Prize must be accepted as awarded with no substitutions in cash or otherwise.

The prize will be sent to the winner by Malvern by post or e-mail. The prize is non-exchangeable, non-transferable, and is not redeemable for cash or other prizes.

Malvern Instruments reserves the right at any time and from time to time to modify or discontinue, temporarily or permanently, this contest with or without prior notice due to reasons outside its control (including, without limitation, in the case of anticipated, suspected or actual fraud).

The decision of Malvern in all matters under its control is final and binding and no correspondence will be entered into.

Malvern shall not be liable for any failure to comply with its obligations where the failure is caused by something outside its reasonable control. Such circumstances shall include, but not be limited to, weather conditions, fire, flood, hurricane, strike, industrial dispute, war, hostilities, political unrest, riots, civil commotion, inevitable accidents, supervening legislation or any other circumstances amounting to force majeure.

The contest will be governed by the law and entrants to the contest submit to the exclusive jurisdiction of the courts.

Offer is void where prohibited by law or company policy.