The RHS comes to Malvern every year for the Spring and Autumn shows, bringing a flock of green-fingered visitors to the town.  For the 2015 RHS Malvern Spring Festival, we were excited to link up with Cradley CE Primary School to sponsor their entry into the School Gardens competition. 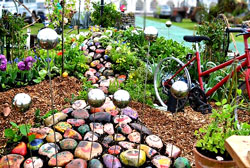 The whole school was involved in designing and creating the garden, starting off with a bit of homework. The theme for the School garden competition was ‘Route to the Hills’ – all about Malvern!  Each child had the task of creating a design for the garden which could be on paper or a model. Based on elements from all the designs the school decided to make ‘Science in Malvern’ the central theme, and chose to name the garden Plant’um Physics. Of course, once we heard this, we couldn’t help but get involved!

The school and supporting parents were keen that the children learned about our products and technologies to inspire ideas for the garden. We had a great time hosting a group of year 5 and 6 students at the factory for a few hours brainstorming ideas with our engineering team. The ideas from the pupils were so innovative! They left with plenty to get stuck into back at school.

We followed up during Science Week in March. The school focused all of the activities for the week around the garden design. Key stage 1 looked at medicinal plants, years 3 and 4 learned about optics, year 5 focused on pumps for water and year 6 learned all about scale by creating a giant ‘powers of 10’ ruler. Engineers from Malvern Instruments helped out with all of the practical demonstrations, and were impressed by the bright minds of the children at the school.

We also held a 3D printing competition to produce something for the garden which every child in the school entered. The winning design, a birdfeeder in the shape of a molecule, was then modelled and printed by a member of the team at 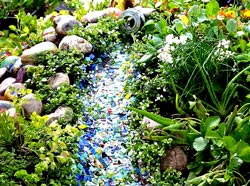 The final garden design featured a whole range of wonderful science and engineering themed elements.  Giant eyes were made using withies and bicycle wheels to represent imaging and microscopy. Scrap parts from our instruments were used within the planting – printed circuit boards nestling in between the plants and old wiring was used to create the ‘Plant’um Physics’ sign.  Metal parts were also used to add structure, and the children incorporated an old computer keyboard with cress growing out of it.  Finally a bicycle was used to pump water to the top of a mosaic stream to create a circulation system – we are considering this design for our next Mastersizer dispersion accessory!

To make the garden personal for every child, each pupil painted a self-portrait on a pebble which was used to create a path through the garden.  They also made a beautiful mosaic, proving  that the perfect garden is a balance of art and science. 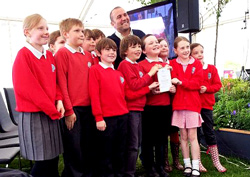 The children all worked very hard during the run up to the competition, and their families even got involved, giving up their Bank Holiday Monday to pull the final design together at the show ground.  After the tremendous effort made by the whole team it was very satisfying that the garden received a ‘Distinction’ award from the RHS during judging. In addition the garden was runner up in the most innovative use of recycled materials and won £100 from the CPRE for joint first place.  Chris Collins, the Blue Peter gardener, presented the awards and was so impressed with Cradley’s design that he paid a special visit to see the garden.

For the staff at Malvern Instruments it’s been fun and rewarding to help the school with the garden design. Making science relevant and enjoyable is so important – however I’m not sure who enjoyed it more, the children or the Malvern Instruments staff!

Thanks to Cradley CE Primary School for the fantastic photos in this blog post.