Derived count rate – what is it? 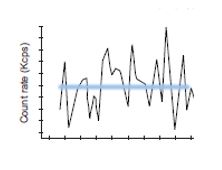 In dynamic light scattering (DLS) we are usually mostly concerned with the level of intensity fluctuations – nevertheless we do need to see a good signal before we can analyze it. The signal strength is the scattering intensity and it is measured in photons per second, or most often as in the Zetasizer in kilo counts per second, kcps for short. The actual average number of photons per second arriving at the detector is also called the mean count rate, the actual count rate, or just the scattering intensity.

What is the mean count rate?


If the detector in the Zetasizer collects 1,000,000 photons over the duration of 100 seconds, then the mean count rate during that measurement was 1,000,000 photons / 100 sec = 10,000 photons / sec = 10 kcps . This number represents the average scattering intensity during the measurement with that particular sample in that specific instrument under the specific optical settings of the experiment. In real samples, the mean count rate is probably much higher, typically 200 – 500 kpcs . The Zetasizer has a very large dynamic range, meaning it can detect the scattering from very low concentration as well as from very high concentration samples. One trick that is utilized inside the system is that some of the signal can be blocked by an attenuator, so even though there would be too much light for the sensitive photon detector, one can still measure a fraction of it with the use of an attenuator.

What is the derived count rate?

If an attenuator is used during the measurement that allows only 0.3% of the light to pass then the measured mean count rate will only be 0.3% of the signal one would be obtaining if no attenuator were present. In the Zetasizer a range of different attenuators can be used, and in automatic mode the system will select an attenuation level to achieve a mean count rate in the optimal 200-500kcps range. In the Zetasizer microV and the APS there is even more fine-tuning available because the laser intensity may also be independently adjusted. How can we compare the signal strength of two different samples which were measured with different attenuation levels? We can just use the theoretical count rate one would obtain at 100% laser power with zero

attenuation. This is called the derived count rate (DCR) and it can be a useful measure to compare the signal strength from different samples: the higher derived count rate usually indicates higher concentration, larger particles, or higher concentration and larger particles. The table to the right lists the different attenuator positions and their respective attenuation or transmission level. There is also an older FAQ-what-is-the-derived-countrate? To display the derived count rate in your software, check the FAQ mentioned in ‘How to display a custom parameter’.

How does this relate to SLS?

In principle, in a perfect sample the derived count rate could be used for static light scattering (SLS), where the scattering as a function of sample concentration leads to the molecular weight and the second Virial coefficient (A2 or B22). In real experimental situations, static light scattering is typically done by fixing all attenuation parameters to avoid any uncertainty in the attenuation coefficients. Furthermore, since in SLS we are often after the smallest scatterers in the sample, one typically averages the intensity over many short sub runs (~20msec, then taking the mean after eliminating outliers) instead of the longer correlation durations used in DLS (~10sec, where everything contributes).

How to display the derived count rate?

Select a workspace, for example the size workspace, and then edit it – Record View Parameters – Measurement – Size – Derived Count Rate and move it to the work space with the right arrow. The derived count rate for each size record will then be displayed in the size work space. 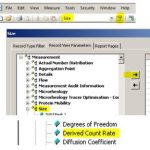