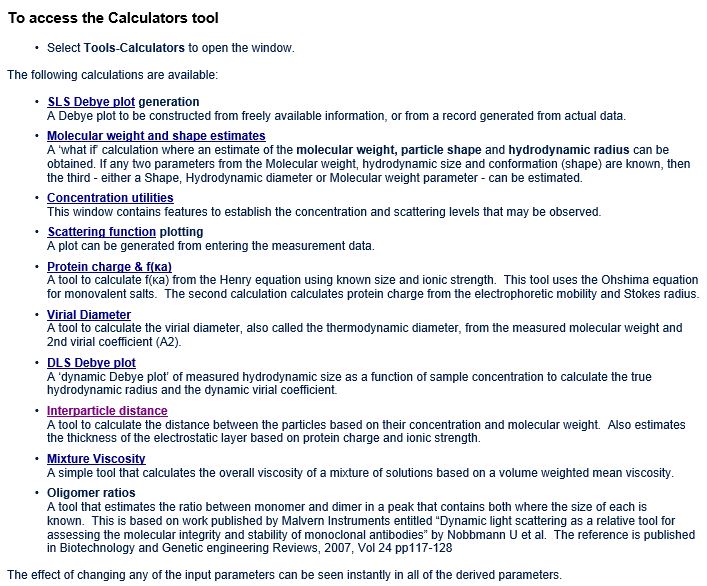 The Zetasizer has some optional advanced protein features that you may not be aware of:

DLS Debye Plot: a dynamic Debye plot of the measured hydrodynamic size as a function of sample concentration to obtain the dynamic Virial coefficient (also known as kd, or interparticle interaction parameter)

Mixture Viscosity: estimates the viscosity of a mixture of dispersants of known viscosity, using the assumption that the total viscosity is a volume fraction weighted sum of the component viscosities. The mean viscosity is based on the volume fraction and the individual viscosities of the component solvents.
It should be noted that some combinations of solvents do not have a predictable viscosity so this tool can only be used as an estimate (e.g. ethanol/water).

Virial Diameter: calculates an apparent size, also known as the “thermodynamic diameter”, based on molecular weight and the 2nd virial coefficient.

How to try out the advanced protein features

If you want to trial these features, go to Tools – Options – Feature Keys – select Advanced Protein Features from the pulldown menu and press OK (acknowledging the suggested free trial key indicated on the screen, it will be active for 30 days from the activation date). A detailed description of these calculators and what they are based on is provided in MRK1858 Introduction to the calculators in the Zetasizer software, with literature references, and some guidance including software screen shots were presented in an earlier webex titled “Use of the unique Zetasizer protein utilities“.

How to check for feature keys

There are several feature keys and here are two possibilities to list a summary of the state of all keys that are currently installed on your computer:

This will open a window with a summary of the currently installed feature licenses. It may for example list ‘Advanced Protein Features: None’ when the special protein features are not present in the software.