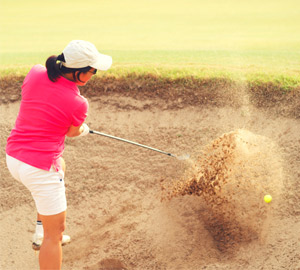 The longer you work at Malvern Instruments, the more likely you are to see anything and everything as something which has been optimized by material characterization in some form. As it’s the week of The Open at St Andrews, let’s take the golf course as an example. Surely particle science has no place here does it? Well it does, in fact, it has been deliberately designed to have a particularly perfect particle size.

The most obvious place to start, but the hardest to escape from, is the bunker. The particle size and particle shape of the sand is absolutely critical. If the particle size is too fine it’s likely to blow away, but if it’s too coarse it may be harder to move and maintain, and cause damage to mowers if it gets blasted onto the fairway. From a shape perspective, angular sands are better in the bunker as they move a little less than spherical sands and are less likely to bury a ball.

It’s not just the bunker that has sand in it, the top dressing which is applied to the fairways includes sand of a defined size. The top dressing is needed as the foot fall at a golf course throughout the course of a year, especially a major one, is extremely large, so the soil needs to be engineered to resist compaction, but drain readily. 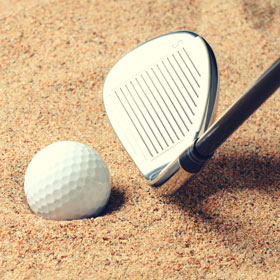 As a result, the United States Golf Association has designed a three-layer soil specification for golf courses including a top layer for supporting grass root growth (500-1000 micron sand), an intermediate layer which controls nutrient retention (>1mm) and a base layer (>2mm) which controls overall drainage. Particle shape is also important here, with rounded sands providing a better environment for grass growth as they cause less damage to roots than angular sand.

With all these specifications, you will probably be getting the idea that there is not much that is natural about modern golf courses! Perhaps, instead, you yearn for a traditional Scottish links course where the environment is more natural. Surly material design cannot follow you there?

Well – you’d be wrong! Material science can change your golf game too. Of course, it is well understood that golf ball and club design can have an impact of a player’s performance. For example, lightweight clubs made of composites containing carbon nanotubes are readily available. However, check out this golf ball that, through the power of nanotechnology, can correct its own flight path so it flies straighter than conventional balls. Your first hole in one has never been closer at hand!

However, no matter how much is designed by science, skill will ultimately always be the deciding factor and that’s why golf continues to be so popular. Perhaps that is also why I will spend most of the Open Championship watching the game from the comfort of my armchair rather than reaching for my clubs!

Recorded Masterclass – Particle Size Part 2: which technique is best for me?