Understanding the survival mechanism of Helicobacter pylori in the stomach 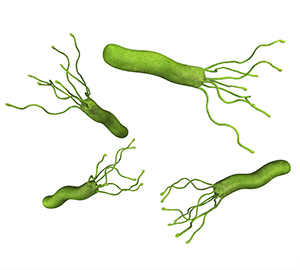 I recently found an interesting research article about the use of ITC to characterize how H. pylori (the bacterium that causes ulcers and stomach cancer) “works”, and I thought it would make an interesting blog.

It is estimated that the Gram-negative bacterium Helicobacter pylori is present in the stomachs of over half the world’s population.  H. pylori infection can lead to peptic ulceration and it is the highest risk factor for gastric cancer.  The key to H. pylori’s successful pathogenicity lies in its ability to colonize the stomach. It is believed that H. pylori has co-evolved with humans over millennia, adapting its mechanisms to its environment over time.

The human stomach is able to degrade and digest food through a combination of proteases and high acidity, and also to kill most bacteria and other potential pathogens. However, H. pylori bacteria are somehow able to survive in the stomach. One unique adaptation of H. pylori h is its ability to counteract gastric acid by producing ammonia from urea, using bacterial urease.  Another survival mechanism of H. pylori is the use of its adhesion protein BabA to attach to Lewisb antigens, which are naturally expressed sugars on healthy gastric epithelium. Since the bacteria are able to directly attach to epithelial cells, they are able to avoid being cleared from the stomach, and colonization is maintained. BabA was first discovered in 1998, but the molecular mechanism for its interaction with Lewisb antigens had remained elusive.

A research study conducted by scientists at the University of Nottingham and AstraZeneca used X-ray crystallography and Isothermal Titration Calorimetry (ITC) to characterize the Lewisb antigen binding by BabA. X-ray crystallography results showed for the first time that BabA uses a unique groove at its tip to bind Lewisb. The binding interaction involves a network of hydrogen bonds that enable the highly specific recognition of Lewisb, but not other closely related sugars. If a few of these hydrogen bonds are disrupted, BabA completely loses affinity for Lewisb.

X-ray crystallography also revealed that BabA has a marked kinked angle between the handle and the head region, which is similar to the SabA7, the only other H. pylori adhesin for which a structure is known. There is a novel carbohydrate recognition domain, represented by a beta-sheet region which the researchers called the crown region, because of its location above the head region. They were not able to find any related sequences in other genes or organisms, suggesting that the crown could be a distinct recognition domain that is a specific adaptation of H. pylori.

The scientists were surprised to find that most variations to the BabA amino acid sequence between various H. pylori strains mapped to a short stretch of amino acids located within the Lewisb binding site, termed the ‘hypervariable crown loop’ (HCL). Due to its involvement in ligand binding, the HCL could potentially explain the marked differences in Lewisb binding affinity and specificity observed between H. pylori strains.

Characterization of the BabA binding site could enable the discovery of effective anti-adhesive compounds which could to be used to treat H. pylori infections. Currently, the standard treatment is a combination of antibiotics and an oral proton pump inhibitor. None of the available treatment options can achieve 100% eradication of the H. pylori infection. The development of drugs which interfere with the epithelial attachment and gastric acid evasion strategy and reduce the adhesive properties of BabA and other adhesins, could result in successful eradication of H. pylori infections. The research described here can aid in the development of new therapies.

Hope you found this article as interesting as I did!

For more information on MicroCal ITC and drug discovery: