A week in the life of a structural biologist

Here is a short story from one of our customers who works in the field of Structural Biology. He shares his experience from a project where the protein he had purified turned out to be significantly unstable. He discovered that using the MicroCal ITC and DSC systems in combination with Malvern Dynamic Light Scattering (DLS) helped him to uncover the instability issue missed by other techniques and offered an optimal solution for his application. 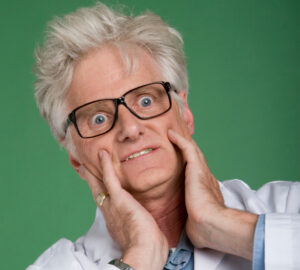 Dave is a structural biologist working on a brand new protein. Dave starts his project by setting up a purification process to produce a usable amount of this exciting molecule. After several months of hard work, Dave is rewarded with several milligrams of beautifully purified protein material.  Size Exclusion Chromatography (SEC) shows a large monomeric peak, SDS-PAGE displays a clear band at the correct mass, and MALDI-ToF analysis confirms the mass!  But before performing X-ray crystallography, Dave wants to characterize his molecule even further, so he sets up an enzyme-based assay to make sure the protein is active.

What is going on?
Is something wrong with the protein, the inhibitor, the substrate or one of the many reagents involved in the activity assay?

A postdoc in the lab next door suggests to try Isothermal Titration Calorimetry (ITC) to try to work out the issue with the activity assay. Dave leaves his protein in an overnight dialysis, ready to explore more the following day.

Watch the short video on the Principles of isothermal titration calorimetry

After a sleepless night, Dave heads back to the lab. He runs an ITC titration and the results do not exactly look like a textbook example (Figure 1,left hand side).  Small signals, large errors in the binding parameters  and apparently a stoichiometry number far below 1 (Figure 1, right hand side).  The data is telling Dave that something is wrong with his protein, as much of it is not competent for binding! 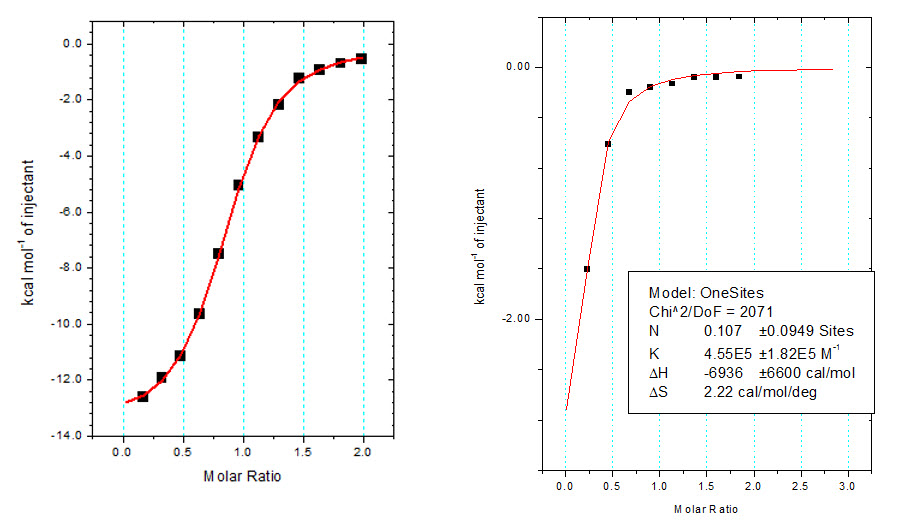 Dave decides to analyze his protein sample using dynamic light scattering (DLS) and by this method is able to confirm the presence of aggregated protein material (Figure 2). How did that happen? After lots of thought, Dave starts to suspect that the protein may not tolerate the concentration step which was applied after purification. Oh no, what a waste of time and effort!

Dave is determined to optimize his protein’s stability and has read that this might be possible using a Thermal Shift Assay following mid-temperature protein unfolding in a set of buffers. There is a differential scanning fluorimeter in his building, but the fluorescent dye used in this assay gives too high a background signal when Dave tries to study his samples. A thermal stability assay with a non-spectroscopic  readout would be beneficial and Differential Scanning Calorimetry (DSC) offers such a solution. In DSC, thermal unfolding transitions are directly tracked through changes in the apparent heat capacity of a protein sample, and the calorimetric signal is unaffected by optical artefacts. It is also very easy to use and doesn’t require any labels or fluorescent dyes (DSC: Theory and Practice).

Dave decides to try DSC. He loads his diluted protein into a 96 well plate and launches the automated DSC analysis. The results look promising! Scans collected for the protein suspended in different buffers show clear differences, and  buffer #3 shows a large positive shift in apparent Tm, with the onset of unfolding occurring 22°C higher (Figure 3).  Dave has believes he has found a buffer which stabilizes his protein!  Dave does a happy dance! 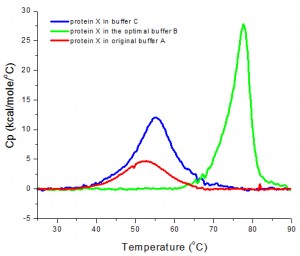 Figure 3: Overlay of baseline-corrected DSC thermograms of the protein in 3 different buffers. Red is the original buffer. Green is the best buffer (Buffer #3) 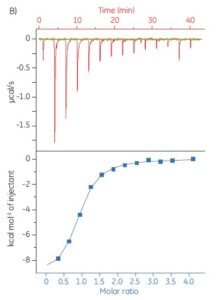 From one ITC experiment, Dave has derived the protein’s binding stoichiometry, binding affinity and enthalpy.  Dave has heard that protein-ligand pairs which successfully pass ITC have higher chances for success in X-ray crystallography, so he is a very happy scientist!  He also understands that binding energetics obtained using ITC can be correlated with structural information.

Dave starts his crystallization and keeps his fingers crossed……

Dave goes into X-ray  to get a structure of exciting protein in a complex with a ligand. Finally, success for the free protein and the complex!  A happy end to Dave’s week. 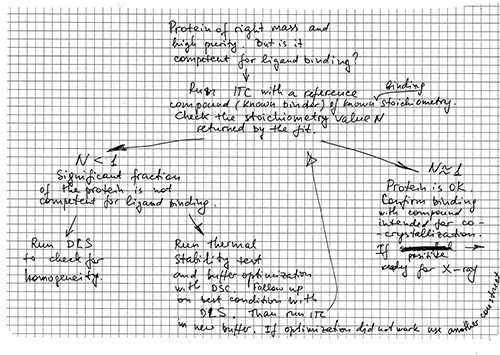 Application note: Microcalorimetry as a tool for structural biology

If you want to see a poster explaining how ITC is being used in drug discovery and development, click here

Previous blog from the same series:

A day in the life of a protein scientist – 1

A day in the life of a protein scientist – 2

A day in the life of a protein scientist – 3