It’s lovely to work in the Malvern Instruments Headquarter at this time of year.  Our usually functional but slightly dull open plan offices are festooned with festive decorations, as each team and department tries to out-do the rest with the flashiest and gaudiest display possible. Of all the departments at Malvern, NPI (New Product Introduction) has really gone to town this year.  Maybe that’s because they have a secret weapon…. snazzy 3D printed, all singing, all dancing, exclusively designed decorations.

For the second year running, Rowena Innocent, Engineering Director, had organised a friendly competition to see which of the NPI team could design and make the best Christmas decoration.  But of course, what is a competition without rules?  They were:

While most focused on a 3D printed take on the traditional tree ornament, there were a few more unusual designs – check out this singing Zetasizer for example, which has been adapted by Julian Smith to play Christmas tunes and flash in time to the music!

We’re very sorry to disappoint you, but this feature is not available on the standard Zetasizer range!  If we get enough requests, perhaps it might make its way into a future release – or perhaps not!

Fred Mazzeo, our European Manager was nominated guest judge. So, let’s get down to the nitty gritty – who won the contest?

In fourth place were Stephen Maughan & Kalita Patel with their rather fetching -and rather Gothic looking – 3D printed Malvern hills themed wreath: 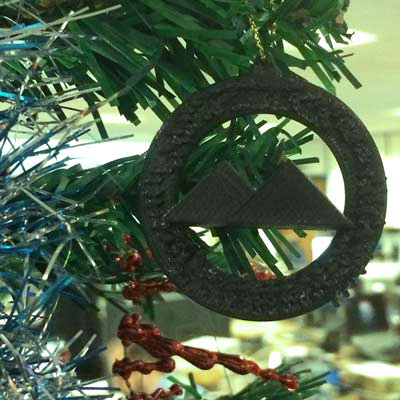 In third place, Chris Whyte 3D printed this beautifully intricate take on the Christmas bauble with a snowflake design: 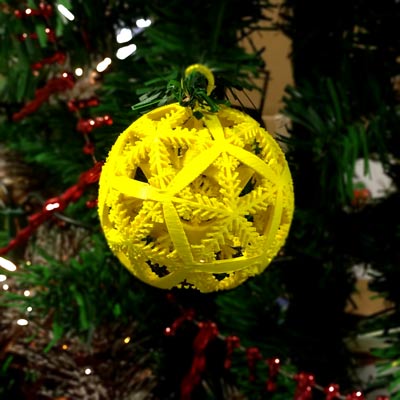 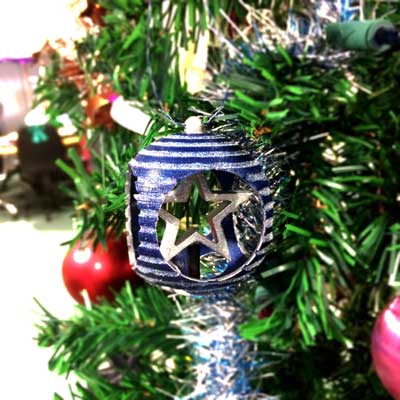 Dave Whitehouse with his incredible 3D printed Santa on a fan-powered sleigh/hovercraft, complete with flashing lights and a choice of music, all controlled with a Malvern-themed smartphone app! 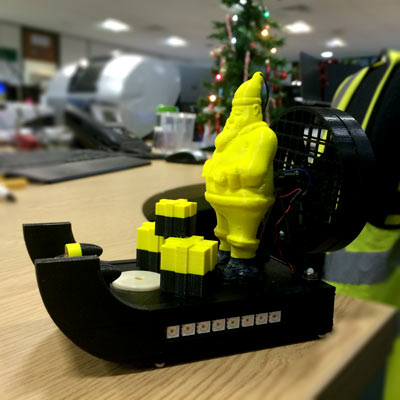 When I asked Dave how he went about designing his masterpiece, he said:

“I’ve been wanting to have a go at 3D printing for a while, so the Malvern Christmas Decoration Competition was an ideal opportunity. Santa on a sleigh was the first thing that came to mind – however as 3D printing is currently quite a slow process the small size constraint we were given made printing a large number of reindeer out of the question. Therefore another (smaller) propulsion system was required – the fan powered boats used on the Florida Everglades fitted the bill. The mechanical design was done using OpenSCAD – a language for drawing 3D objects in code. The electronics was based on the Arduino platform – a small module with a development environment that’s really quick to prototype things with.  Added with a Bluetooth serial module, a lithium ion USB battery charger and an Android mobile phone, this makes a powerful system for Christmas decoration automation.”

Dave has even coded a present for you to try out in OpenSCAD – click here to download the software, and scroll to the bottom of this post for the code.

“The product development team always impress me with their innovative designs and the Christmas decoration competition was no exception. A Kano analysis shows it covered the basics – use of 3D printer, Christmas theme, delivered on time. Then we had the performance satisfiers – use of LEDs and complex 3D shapes. But wow, I wasn’t expecting so may delighters – Santa on a fan powered sleigh with Bluetooth, user selectable theme tunes and coordinated LEDs! Who wouldn’t want one of those in their stocking this Christmas?”

Here’s the winning design in action – isn’t it incredible to think that this was Dave’s first attempt at 3D printing?:

Well done to all from the NPI team who took part – some brilliant, inspiring designs.  I’ll certainly be putting a home 3D printer on my Christmas wish list – well, a girl can dream can’t she?!

A Sample of Dave’s Code:

First download the OpenSCAD software from www.openscad.org . Then, copy and paste the text below into a text file Present.scad, open it and press F5 … Merry Christmas! 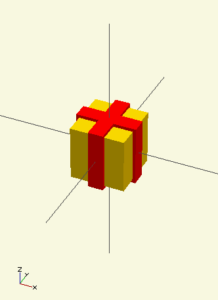