On Sunday 2nd July 2017, a team of 21 Malvern PANalytical employees and friends will be tackling a 250 meter stretch of the River Severn in Worcester in a Dragon Boat.  They will be competing against a number of other companies in an annual charity regatta event hosted by Worcester Dragon Boat Racing Club. 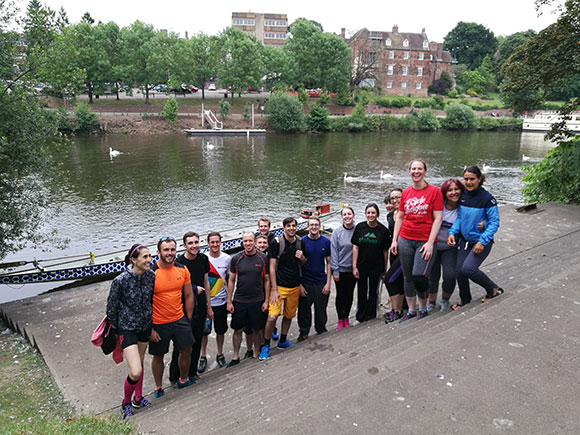 A Dragon Boat racing team consists of 16 paddlers, a drummer and a steersperson (provided by Worcester Dragon Boat Racing Club).  They sit 2 abreast and each have one paddle, which, unlike in rowing, is not rigged to the boat.  The technique for good racing is actually quite complex, but the main items to focus on are timing (it’s important this is not too fast), stroke length (it’s all about reaching as far forward as possible and pulling back to the hip), and making sure the paddle is fully submerged in the water.  All these techniques help each paddler achieve the most power possible out of each stroke.

Malvern has competed in this event a number of times over the years with varying degrees of success, but whatever the result, the feedback has been that of thorough enjoyment from both participators and spectators.  There is a great competitive and respectful atmosphere during race day, with each team acknowledging their competitors by giving them 3 cheers at the end of the race, whether they won or lost.

Last year we managed to come 4th out of 23 teams (a massive 9 place improvement on 2015), but as ‘cheesy’ as it sounds, it’s not all about winning – there is a really good spirit to the competition and it’s a great day out.

I trained and competed last year. We had different training instructors for each of the 3x training sessions, and although each had a different personality and approach, we all found them very helpful creating an educational yet fun experience. The event itself was well organised and great fun. I would recommend this experience to anyone – young, old, fit, unfit, etc…

Each race should take approximately 1 minute, but don’t think that makes it easy!  As our instructor says, “if you can talk at the end of the race, you haven’t worked hard enough!” 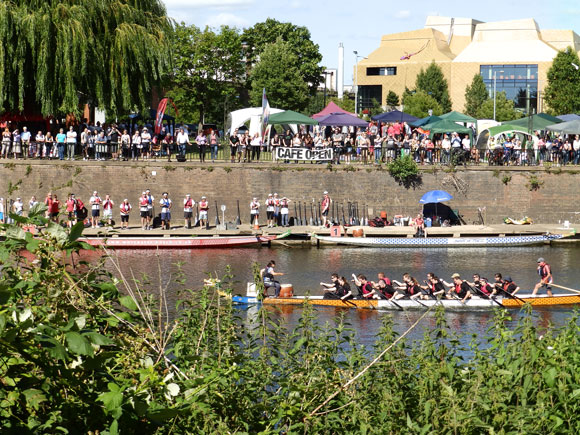 On race day the weather could not have been better, sun stroke was the most concerning aspect! The new location for the event (slightly further downstream and closer to the public than the previous year) was fantastic, with much more atmosphere & interaction between crews and spectators. Again the spirit of the day was amazing with all teams being very respectful and joking with each other. At 10:50 we had our first race, which we just managed to win in a time of 1:10:97, but we realized that our pacing was slightly too high and thus we had lost some power. For the second race at 12:20 we slowed but lengthened the stroke rate and the boat glided beautifully through the water with a comfortable win in a time of 1:07:91. At this point, we were in 12th place with the fastest time being 1:02:22. Our next race was against the 2nd fastest and 9th fastest, teams that had managed 1:02:22 & 1:07:84 in previous heats.

To our surprise, for most of the race we were actually in the lead, but Southco Spartans powered it through on the last stretch to take the win. Still, we managed 1:07:06 our best time so far and that was with one of our paddlers losing their footing and a number of strokes at one point.

Unfortunately, this time was not quite quick enough to get us into the semi-finals, we would have needed another 2-3 second off. But it meant we had one more race to determine if we were 10th, 11th or 12th. After one team pulled out it was Malvern Panalytical against the Flying Dragons who had managed a 1:07:00 previously. We knew it would be a tough race, but we gave it everything we had, probably a bit too much that technique got a bit lost! We were neck to neck all the way to the finish line and it ended up being a photo finish with Malvern PANalytical just taking the win by 0.4 seconds to end in 10th place out of 25 teams!

What a fantastic day, with a great team, organized by a fantastic organization “Worcester Dragon Boat Racing Club”, and for a great charity Leukaemia Care. I would recommend to anyone who likes water, competition and something a bit different to the norm.