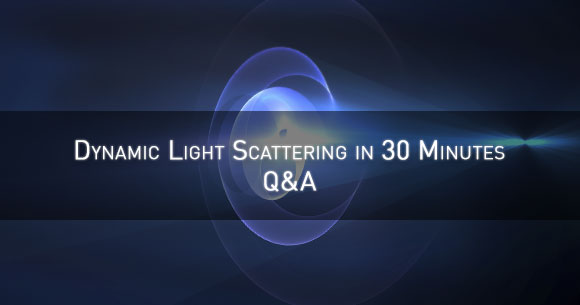 A webinar entitled “DLS in 30 Minutes” was given in June which attracted a very large audience. The presentation introduced dynamic light scattering and covered the principles of the technique, a discussion of how the measurement is performed, how the data is analyzed and how the results obtained should be interpreted.

We were inundated with various questions during the webinar and we only had time to answer a few on the day. The remainder of questions were answered via e-mail but we thought it would be good to share some of these in this blog.

If you missed the webinar, you can view a recording on our website.

What is the maximum particle size that can be reliably measured by DLS?

DLS measures the random motion of particles undergoing Brownian motion and the technique will not be applicable when the particle motion is not random. Therefore, the upper size limit is sample dependent and is normally defined by either the onset of particle sedimentation or by number fluctuations.

The presence of sedimentation can be determined by checking the stability of the count rate from repeat measurements of the same sample. Count rates which are decreasing with successive measurements indicates that sedimentation is present and the Expert Advice system will highlight this to the user. 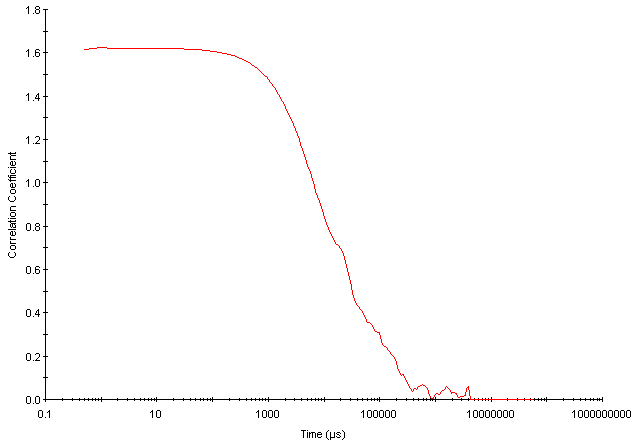 When the fluctuations are large, the intercept will vary and may be greater than 1 as shown in the right-hand correlation function. This may make the result unreliable. In this case, it is recommended that the large particles are removed by filtration or centrifugation or allowed to naturally sediment over an extended period.

The maximum size we have measured is 10 microns (9 microns peak mode) which was a sample of polystyrene latex prepared in 13% w/v sucrose to density match the particles.

What does a correlation function intercept of greater than 1 mean?

A measured intercept value of greater than 1 normally means that the sample contains very large particles/aggregates/dust which are causing an interference with the measurements. We refer to these as number fluctuations (please see question above).

When a sample exhibits this type of correlation function, then it is not suitable for DLS and that the large material must be removed before the measurements are retaken.

Are there any special precautions to take when measuring highly absorbing particles (such as blue pigments with a red laser (633nm wavelength))?

Blue pigments are challenging with a red laser. However, with a NIBS instrument (i.e. backscatter 173° detection angle), if the sample is strongly absorbing the laser, the measurement position will automatically move towards the cuvette wall. There are, therefore, no precautions to take as such. Simply try to measure the sample and see how good the intercept is in the correlation function. If the measured intercept is less than 0.1, the sample should be diluted and re-measured confirming that the size obtained is independent of the sample concentration [ISO22412 (2017)].

The following link is to an application note which details measurements made on concentrated blue pigments using a Nano S NIBS instrument.

What is the minimum size measurable by DLS?

The lower size limit of DLS depends on many factors such as the optical configuration of the instrument, laser wavelength/power, detector sensitivity, sample concentration and excess level of scattering. This latter point is the difference in scattering between the dispersant used and the molecule/particles in the dispersant. The greater the level of excess scattering, the easier it is to measure.

The smallest size measured on a Zetasizer is 0.6nm (peak mode) and here is a technical note detailing the measurements.

What about particles which are non-spherical?­

For non-spherical particles, DLS will give the diameter (or radius) of a sphere which has the same average translational diffusion coefficient as the particles being measured.

How do you know if the sample being measured shows sedimentation?

The easiest way to detect whether sedimentation is present in your sample is to take several repeat measurements (say 3 or 5) and look at the mean count rates from each of the measurements. If sedimentation is present, the mean count rate will decrease each time the sample is measured. Here is an example of some results obtained for a sample containing sedimenting particles……….. 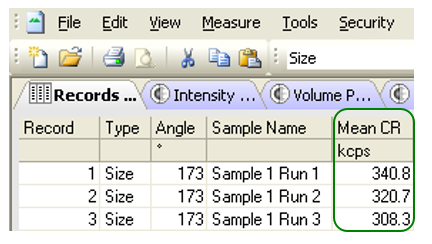 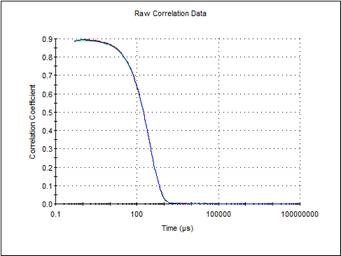 However, if sedimentation is present (or the sample is changing with time), then the correlation functions from repeat measurements will not overlap with each other. For example…………. 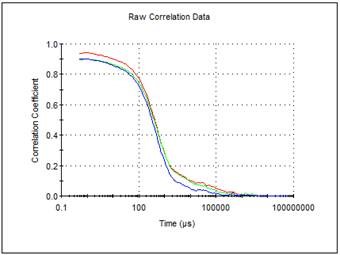 Please also note that the baselines of the correlation functions are elevated (i.e. they are not flat). This is evidence of number fluctuations which are defined as variations in the number of particles within the scattering volume during a DLS measurement as further discussed above.