Standing at just under 3800 m tall with its distinctive symmetrical cone-shaped peak, the majestic Mount Fuji, or Fujisan (富士山) as it is known locally, is one of the most iconic symbols of Japan.

Therefore, it seemed only appropriate that whilst on secondment in Malvern’s Tokyo application lab, I should attempt to reach the summit of this famous volcano and, in something of a cliché, watch the sunrise from the highest peak in the Land of the Rising Sun.

There is only a short window each year in which one is permitted to attempt to summit Fujisan, so early one Saturday morning in the climbing season, I set off from Tokyo to the Yoshida Trail base.  With the obligatory Fujisan pilgrim’s staff or kongoudzue (混合杖) in hand (complete with bells and ribbon), I conscientiously collected the various stamps on offer at each of the mountain stations, ticking them off, one-by-one, as I ascended the mountain.

Reaching the mountain hut at the 8.5 station (the closest hut to the summit at 3,450 m), I took a well-deserved break and after chatting with my fellow hikers for a bit, tried to get a few hours’ sleep before embarking on the final stage of the journey. Getting up at 3.30 am to ensure that I would definitely be at the summit in time for sunrise, irrespective of the inevitable queuing and crowds of people with the same objective as me, I set off with my headlamp on.

On stepping outside the hut I was greeted by the sight of a steady stream of people, making their slow ascent along the mountain path.  I joined the queue of headlamps snaking their way up the side of the mountain. 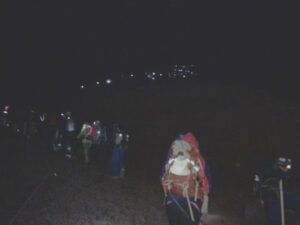 Figure 2: pre-dawn, headlamps dot the mountainside as hikers wind their way to the summit for sunrise

On reaching the summit, I found a space to sit and proceeded to put on all the clothes I could find in my bag, including my waterproof trousers (it wasn’t raining).  It is quite cold, pre-sunrise, at 3800 m…  Wrapping my survival blanket tightly around me, I ate my breakfast and waited.  And waited.  More people joined us on the summit of the mountain.  And waited.

Finally, a glow started to appear in (what presumably was) the east.  Braving the cold, I periodically slipped my hands out of their protective triple glove layers to take photographs as the sun began to make its welcome return.  Slowly, but surely, the reddish glow became orange, brighter.  And warmer!  I could feel the warmth seeping into my frozen limbs.  Orange glows became yellow, brighter still… And finally! The top half of the sun peeped out over the horizon, Amaterasu Omi Kami coaxed out of her cave.  I captured the magical moment on my camera…before the battery in the aforementioned camera phone decided that the suspense was too much and promptly died.  Comic timing. 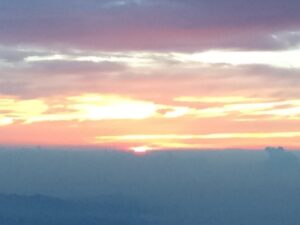 Figure 3: the sun peeps out over the horizon…before my camera battery died

Following sunrise, I walked around the crater. Unfortunately, by this time the weather had taken a turn for the worse and visibility was not great, so after a while, I began my descent (now minus the bells on my pilgrim’s staff, I noted…).

Before catching the bus back to Tokyo, I bought some souvenirs: small pieces of red and black rock for compositional analysis back in the lab on our Morphologi G3-ID system (as one does).

Primarily interested in the chemical composition of the samples, to make sample preparation more straightforward I ground up both samples before dry dispersing them ready for measurement. Using Morphologically-Directed Raman Spectroscopy (MDRS), I targeted particles in the 25-75 um size range for the automated Raman analysis.

Then came the interesting bit: identifying the minerals in our two samples, and comparing their composition. Using the integrated KnowItAll Raman mineral database, we were able to identify a range of minerals in the two rock samples. These then formed the basis of a reference library from which all of the particle spectra were automatically compared and correlation factors determined. Thus, the particles from each sample could be classed based on their chemistry.

This property is reflected in the particle intensity mean (effectively a measure of light transmittance), where ilmenite was observed to have a much lower intensity mean than that of orthoclase.  However, physical characteristics alone are not always sufficient to differentiate between classes.  As Figure 5 illustrates, haematite (red trace) and obsidian (brown trace) appeared to have identical intensity mean profiles.  However, the Raman spectra were significantly different, enabling these particles to be correctly classed.

But what of the results?

From the classes created, we could compare the mineral composition of the two samples.  As Figure 6 illustrates, both samples contained similar proportions of diopside and forsterite, and that whilst the black rock contained more orthoclase, the red rock had a greater ilmenite component.  The most significant difference, however, was that the red rock contained over 75% more haematite than the black rock – perhaps not wholly surprising given the all-too familiar coloring of iron oxide! 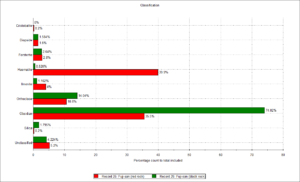 This kind of chemical composition information, and associated morphological profiling, can help reveal clues about where a sample of interest has come from, or the processes it has been subjected to.  It thus finds use in a wide range of applications, ranging from the geological mapping of tsunami or volcanic ash deposits to aid in the prediction and mitigation of future natural disasters, through to the identification of counterfeit drugs in forensic investigations – and even in the analysis of a couple of souvenirs from Fujisan!