Seeing the Unseen: The Value of Spectral Satellite Imagery

In the realm of earth observation and as satellite imagery and remote sensing become more popular, it can still be confusing to determine how to use or interpret imagery to solve real problems.

When is an image not just an image?

If you think about the photos you take with a camera, what you see is what you get. A color photo combines red, green and blue reflected light in the same way that our eyes capture reflected light, so it looks like a realistic version of what we would see if we were looking from the same point as a camera.

Captured via an above ground sensor like a satellite, a spectral image is more than just a photograph. A spectral image, sometimes referred to as a “multispectral” or “hyperspectral” image, results when light is split up into many narrow bands, as opposed to just the blended red, green and blue of the traditional camera image. A spectral image can also capture information outside of the tiny visible region of light, beyond where the human eye can see. These other regions of light can include ultraviolet, where bumblebees can see, and infrared, where goldfish can see. The majority of spectral satellite imagery contains extra bands of light in the infrared region.

The ability to “see” beyond the visible spectrum makes spectral imagery quite valuable, as there is a lot of hidden information in these additional bands of light that can be extracted. For example, many vegetation features have characteristics that are well differentiated in the infrared region. Spectral imagery also does allow you to capture information over large areas that would be almost impossible to do without it.

That’s all great, but how do you actually identify the hidden features that are in the spectral imagery?

Small, portable ASD field instruments called “spectrometers”, like the FieldSpec®, allow you to identify spectral features on the ground with great accuracy and corroborate them with the same features in the satellite images.

Every feature on the ground has a unique spectral signature created from measuring reflected light; a field spectrometer allows you to capture these unique signatures. So, after acquiring satellite imagery, you should invest in using a spectrometer and spend some time identifying areas of interest to further help define features of interest and collect their unique signatures. 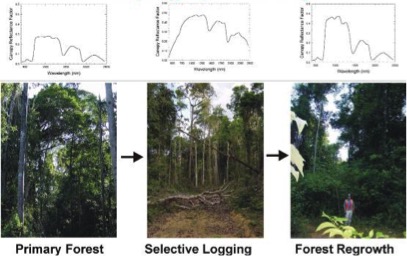 1) By identifying things that the human eye or an image cannot distinguish and determining the amount or concentration of the substance:

Many industries need to know what types of materials are present in a certain location and how much of a material is present. Examples of this include local government agencies needing to know land cover categories for tax assessment, or where illegal building is occurring. Other examples might include an insurance company needing to know what type of roofing is used within an approximate area, or how close buildings are to bodies of water; also, defense and intelligence agencies needed to identify the type and number of planes found on a military base. Spectral imagery makes these things possible to do because you can discriminate between materials in an image that looks similar to the naked eye.

2) By monitoring feature changes and conditions:

Spectral imagery can be used to understand crop and forest conditions affected by nutrient deficiency, moisture stress, and pests so that corrective action can be taken quickly.

Additional monitoring examples include the amount and type of air pollution emitted from factories, assessing the condition of pavement along miles of roads, assessing the pace and amount of urban growth and land cover changes, and/or where refugees are setting up shelters after a natural disaster occurs. Even monitoring indicators for a public health situation like Zika, where the spread of the virus needs to be addressed quickly, can be done using spectral techniques.

As we begin to scratch the surface of earth observation, there are literally hundreds of applications where remote sensing can add value to solve real problems, and many of these applications are still yet to be discovered.