Zeta potential in salt solution (or any other ions)

Will the zeta potential of my vesicles vary in different buffers? 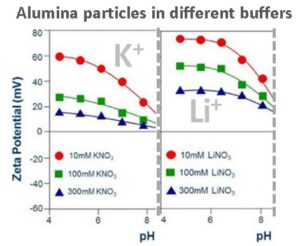 The short answer is: Yes, it will. In select cases, the value of the measured zeta potential may remain close to the same. However, that is the exception rather than the rule. This is no different for vesicles than for other nanoparticles, biomolecules, polyelectrolytes, etc.

How does zeta change with salt concentration?

The zeta potential of a colloidal particle in solution is a description of the overall effective net charge of the particle under the sample system conditions. Thus the effective net charge includes all charges (including counter ions) that are “held” within the volume given by the slipping plane around the particle. If more or less salt ions are present in the vicinity of a charged particles, this will manifest itself in two ways:

This implies that small zeta potential values may be amplified by reducing the ionic strength of a buffer, provided this is a viable option for your formulation project. The Zetasizer measures the conductivity of the sample (measured in milliSiemens per cm, mS/cm), which provides an easy way to check on overall ionic strength differences in different samples. Higher conductivity is synonymous with higher ionic strength as the two are related. The main theory to explain this is called Debye-Hückel theory.

What about different buffers?

Intuitively, one could guess that the type of buffer should not matter as long as the valency of the salt ions remains the same. However this is not always the case and it can become especially apparent when approaching the iso-electric point (IEP) of the sample, or if there is a preference for specific ions to spend more time closer to the surface of the particle or molecule-solvent interface.

When a specific ion type preferentially adheres to a particle, even small differences in the makeup of the charge cloud surrounding the particle can have a significant influence. This can be especially obvious in the induced shift in the isoelectric point. In the example below, the IEP of the sample is shifted in the presence of Lithium but remains the same in the presence of Potassium ions. The graph also nicely illustrates the fact that for lower ionic strength (the red data points) absolute zeta values for a sample are stronger than those for higher ionic strength (the blue data points). In addition, the absolute value at the same pH and the same ionic strength is different for the LiNO3 or the KNO3 preparation. 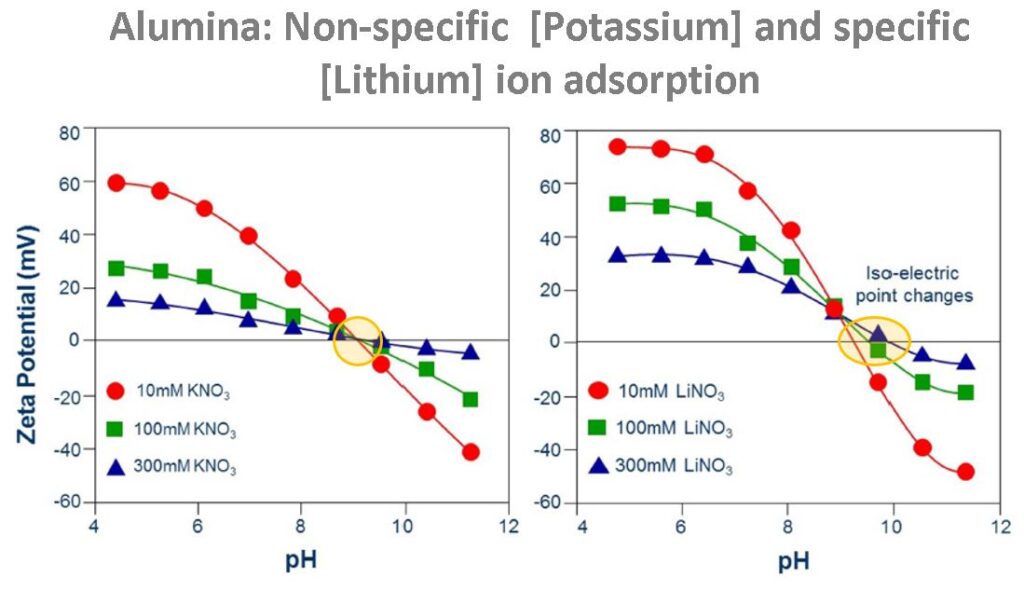 If you have any questions, please email me at ulf.nobbmann@malvernpanalytical.com. Thanks! While opinions expressed are generally those of the author, some parts may have been modified by our editorial team.