TSSM’s are mite pests that can cause significant damage to plants – these are some of the most pervasive and ubiquitously distributed arthropod pests on the entire globe. They are found on thousands of different field and greenhouse food crop plant hosts, including over 1,300 economically important global hosts. The feeding of this pest negatively affects leaf development and subsequent fruit reproduction by inhibiting photosynthesis.

As TSSM infestations spread rapidly, early detection is critical to limiting the reduction of crop yield.

A publication by Herrmann et al. (2015) builds on their past work in the early detection of two-spotted spider mites (TSSM) on agricultural crops. 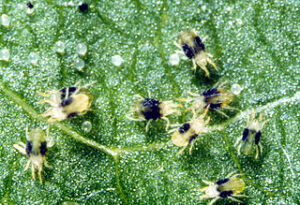 et al. 2011 & 2012) established the link between leaf spectral characteristics and TSSM infestation. The spectral changes observed (see figure below) are similar to other vegetation stressors that damage chloroplasts: the shorter wavelength chlorophyll absorption features decrease in strength more rapidly than the dominant 680 nm feature. This results in a steady increase in the slope of the reflectance spectrum in the 580 to 680 nm range with increasing cellular damage.

In his work, Herrmann et al. (2015) developed a full spectrum partial least squares discriminant function that provided 100% detection of even the earliest stages of infestation.

Links to past work, referenced above, by Herrmann et al.: