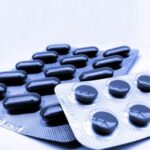 Detection of trace polymorphs, determination of amorphous content, and the study of the stability of active pharmaceutical ingredients (APIs) subjected to heat and humidity are some of the many applications where a modern powder X-ray diffraction (PXRD) system can add value to drug development.  Advances in beam conditioning and detector technology have led to greatly improved detection limits, resolution, and range of applications now possible. Today’s modern, laboratory-based PXRD instrumentation and advanced software can greatly assist pharmaceutical scientists in their quest to develop high quality, stable products and accelerate their speed to market. All applications described and many more can be performed on a single PXRD instrument, such as the Malvern Panalytical Empyrean.

Detecting the Presence of Trace Polymorphs and Impurities

The detection of trace polymorph phases is one of the most important applications for powder X-ray diffraction in the pharmaceutical industry. While classical PXRD configurations were purported to have a limit of detection (LOD) in the range of 0.5-2%1,2,3, modern systems with specially designed optics can have detection limits below 0.1%, up to an order of magnitude below the commonly believed detection limit. These optics achieve excellent LOD by suppressing the continuous radiation (Bremsstrahlung) and therefore improving the signal to noise ratio in the data. One such optic for greatly improved limits of detection is the Malvern Panalytical BraggBrentanoHD optic (BBHD). 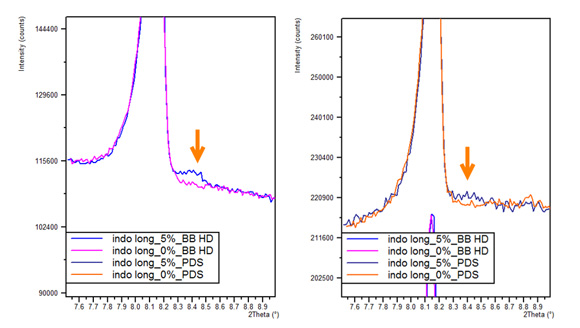 The example below shows part of the diffraction pattern for an Indomethacin (IMC) mixture of two crystalline polymorphs in the excipient. The mixture was made with 0.25 % alpha-Indomethacin, 4.75% gamma-Indomethacin and two excipients (98.5% alpha-lactose monohydrate, 1.5% Magnesium stearate). Figure 1a. shows the alpha-Indomethacin peak measured with a BBHD optic with a significant improvement of the LOD to 0.12%, as compared to standard slit optics in Figure 1b.  BBHD offers further benefits to pharmaceutical research, with its improved low angle performance as compared to slit optics, and the suitability to be used for several applications beyond powder diffraction, including small angle X-ray scattering (SAXS) and micro-spot analysis.

Stability of Materials Subjected to Varying Heat and Humidity

Storage and transport of pharmaceutical substances can expose them to heat and/or high relative humidity (RH), which in turn can induce unexpected phase transformations that can affect a product’s efficacy. Modern PXRD systems can be equipped with the latest temperature controlled humidity stages, allowing the measurement of PXRD data at RHs up to 95% at room temperature and 75% at 60 degrees C. 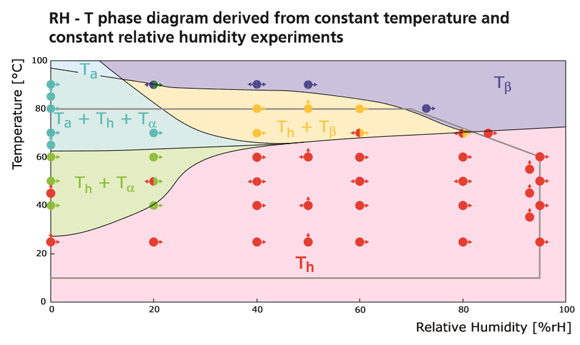 In this experiment, crystalline trehalose dihydrate (C12H22O112H2O), an important cryoprotectant used in the production of protein-based drugs that undergo lyophilization, was exposed to a range of temperature and relative humidity combinations. The PXRD patterns were analyzed to determine which phases were present at each condition, and a resultant RH-T “phase” diagram could be developed. Trehalose dihydrate (Th) was seen to be very stable over a wide range of temperatures. Two polymorphs of trehalose anhydrate were observed: a stable form Tβ and an unstable form Tα. An amorphous form of trehalose (Ta) was also observed in the high temperature – low humidity regime.

Click here to read the full whitepaper recently published in American Pharmaceutical Review on the subject of pharmaceutical challenges addressed by PXRD.