COOL down in the summer heat! ASD’s FieldSpec Spectroradiometer helps unlock the secrets of snow

Dr. McKenzie Skiles discusses what it means for climate and hydrology studies

PLEASE NOTE! The webinar date has been moved… Dr. McKenzie Skiles presents her research on our upcoming ASD September 27th webinar, “Climate and hydrology studies leveraging ASD VNIR spectral snow albedo measurements.” This webinar will discuss snow applications and the use of Malvern Panalytical’s ASD FieldSpec® spectroradiometer for data measurement and analysis. The article below details some of McKenzie’s snow data collection and collaborative research project efforts out in the field, as presented by Sarah Fecht.

‘X-Snow’ Project Needs Your Help To Unlock The Secrets of SnowAuthored by Sarah Fecht. Sarah is the content manager at State of the Planet with The Earth Institute at Columbia University (NY, USA). She has previously worked as a freelance science journalist and an editor at Popular Science. 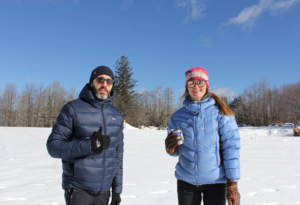 Marco Tedesco is leading the X-Snow study.
McKenzie Skiles flew in from the University of Utah to serve as a drone pilot.
Photo: Clarisa Diaz, WNYC

McKenzie Skiles crouches in the crunchy snow, trying to get her drone to take off. Something’s wrong with the controller’s battery, and no wonder: the temperature is barely above freezing, and an icy wind slashes mercilessly at any skin that’s unfortunate enough to be exposed. After half an hour or so of troubleshooting, the drone flight is officially called off—for now.

This is a good reminder that fieldwork doesn’t always go as planned, explains Marco Tedesco, who studies snow and ice at Columbia University’s Lamont-Doherty Earth Observatory. Tedesco is leading an investigation into the properties of snow in the eastern U.S., which is what brought us to the ice-crusted field in the Catskills. Skiles, a hydrologist, flew in from the University of Utah to help with this pilot study.

The difficulty of doing fieldwork is one of the reasons why Tedesco—in partnership with WNYC, a New York-based public radio station—is asking for help from citizen scientists and crowd funders. Using simple tools, anyone can measure the properties of snow in their backyards to help out with the study. The project is called X-Snow, after the X-Men comic books, “because every citizen has the superpower to help us,” says Tedesco.

Snow plays an important role in Earth’s climate. It reflects solar radiation back into space, helping to keep Earth cool. It can also be an important source of drinking water and hydropower, and many plants and animals depend on snowfall patterns for survival, reproduction, and food. But for all its importance, there’s a lot we still don’t know about snow, particularly along the east coast. 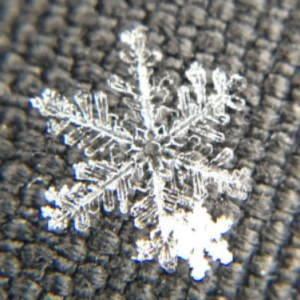 Closeup of a snowflake, captured with a clip-on smartphone lens.
Photo: Patrick Alexander

“We want to know how the snow changes, evolves,” says Tedesco. “Where does it sit on Earth? For how long? How deep is the snow? How bright is it? What are the impurities?”

Satellites can answer some of these questions, such as where the snow is and how much is there but only over a scale of miles. And the satellite measurements get muddled if the drifts are particularly deep or wet.

Tedesco and his team are studying snow at a higher resolution instead, by measuring the depth, reflectance, and flake size from the ground. This data will help to validate and improve the models, based on satellite data, that predict weather, flood threats, drinking water supply, and more.

“These models are as good as the physics that we know,” says Tedesco. “Trips like this help us to better understand the physics.”

The study will provide a deeper understanding of how snow is different from place to place, and how it’s fluctuating from season to season and over the long-term in response to climate change.

Evolution of a Snowflake
Patrick Alexander, a postdoctoral researcher in Tedesco’s lab, scoops up a spatula full of snow, then uses a paintbrush to sweep a few flakes onto a card. A grid on the card helps to estimate the size of the flakes, and a $17 lens lets him take incredible close-ups of the frozen crystals using his phone. The shape and size reveal a lot about the snowflake’s past.

“Snow history begins in the atmosphere,” explains Tedesco. “You have these little nuclei, basically, of dust or any impurity, around which the ice starts to grow, and the snowflake starts to evolve.” As it falls to the ground, the atmosphere’s temperature and humidity influence the shape and size of the snowflake. 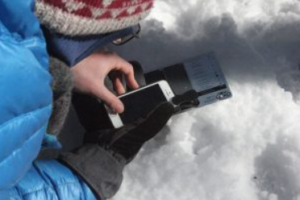 On the ground, the snow continues to evolve. Wind might break off some of the snowflake’s arms. It might get crushed under the weight of fresher snow, or melt from the warmth of the ground. Those liquid remains can serve as the glue that fuses other snowflakes into grains, tiny balls of ice that affect how much sunlight the snow absorbs.

Because of all this, looking at the snow up close can be very useful, says Alexander. Analyzing the grain size and shape at different heights—from the warmer snow near the ground to the colder, fresher snow near the surface—can reveal the history of the snowpack, whether there has been melting, and even whether the area may be avalanche-prone.

“If there’s an area near the base where there’s been a lot of sublimation—so the snow turns into vapor—that reduces the density a lot,” says Alexander. “It’s very porous, and that layer can just kind of collapse and initiate an avalanche.”

The Most Colorful Surface On Earth
It’s also important to measure how much sunlight the snow is reflecting since it helps to cool the plant. To do measure reflectance or albedo, research assistant Melissa Linares dons a backpack that looks like it’s straight out of Ghostbusters. Wires spill out of it, connecting to a wand that Linares holds out in front of her. When she points its [fiber optic] sensor toward the sky, the [ASD FieldSpec® spectroradiometer] measures how much sunlight is incoming. When facing the ground, the sensor gauges the wavelengths that are bouncing off the snow—and not just visible light, but ultraviolet and near-infrared radiation as well.

Two main factors affect how much sunlight rebounds off the snow. The first is impurities. Just as a dark t-shirt soaks up more heat than a white one, snow that contains soot or dust is going to absorb more heat.

Melissa Linares points the [ASD FieldSpec spectroradiometer’s fiber optic cable sensor with pistol grip] at the ground to measure how much sunlight is reflecting off the snow.
Photo: Sarah Fecht, Earth Institute

The second factor is grain size. As the snowflakes merge into tiny snowballs, they’re able to absorb more solar energy. “The snow still may look bright to our eyes,” says Tedesco, “but it’s absorbing more solar radiation than it did before.”

Skiles explains why: “Pure ice is transparent in the visible wavelengths—light will just keep traveling through it almost like water. But when you turn ice into little particles like snowflakes, there are lots of edges and the light scatters off of those.” Later, when the snowflakes fuse into grains, those sharp edges disappear, and so does a lot of the reflectance. “There’s more ice that the light has to pass through, and so over time, what will happen is that snow will darken in the near-infrared.”

Snow looks white to us because it reflects visible light very well. But if we could see near-infrared waves, snow with a large grain size would look black because it’s absorbing so much of that type of radiation.

“If our eyes could see across this full range,” says Skiles, “snow would actually be the most colorful surface on Earth because it goes from being almost totally reflective to almost totally absorptive across the solar spectrum.”

Climate Connections
Warmer temperatures help the snow to fuse into those larger grains that are so good at absorbing energy. As a result, the snowpack melts faster and exposes more of the bare soil underneath, which is even darker and absorbs more energy. In turn, the warmer surface heats up the atmosphere. Making matters worse, earlier and earlier melting means less light and heat get reflected into space.

‘If you melt the snow sooner, you warm things up faster,” says Tedesco.

The changing climate may have economic impacts as well. Instead of storing water as snow and ice throughout winter, then releasing it gradually in the springtime, yo-yo-ing winter temperatures bring rain that can eat away at the snowpack in just a few days. “There’s no easier way to wash away snow than rain,” says Tedesco. And because the soil is still frozen, it can’t absorb that water. Instead, the meltwater runs off into rivers and eventually dumps into the ocean. This could eventually stress the aquifers and reservoirs we depend on for drinking water. It could affect local ecosystems as well as skiing, tourism, and hydropower generation.

Ready for Takeoff
After a lunch break and a chance to unthaw and recharge, Skiles is ready to try again with the drone. We drive to a new site and she sets up the quadcopter in the snow. Despite temperatures even more frigid than earlier, the machine buzzes to life and ascends into the sky.

The drone helps to measure snow depth. As it flies, it snaps a series of overlapping pictures. The software can stitch these pictures together into a 3D model of the snow’s surface. Then, if Skiles returns to this field in the summer to map it again when it’s snow-free, the difference between those two maps will give the snow depth.

Depth is important because when it’s combined with the density (how tightly the snow crystals are packed together), the researchers can estimate how much water the snow will give off when it melts. The drone allows them to rapidly measure the depth over a large area, rather than at just a few points.

How You Can Help
Snow conditions can vary from even one side of the street to another, so it’s important for the team to collect as much data as possible. It’s like being a doctor, says Tedesco. “If you have a denser set of measurements, you can better diagnose what’s going on.”

But the team can’t be everywhere all at once. That’s why they’re hoping citizen scientists will pitch in. Fortunately, you don’t need a drone or a Ghostbuster backpack to help. The X-Snow website explains how you can collect data on snow depth and snowflake size and shape, then send it to the team. 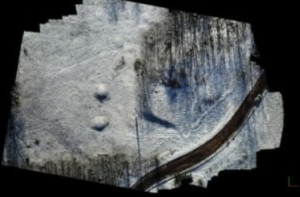 A view of the surface model created from the drone data.
Image: McKenzie Skiles

The second way you can help is by donating to the crowdfunding campaign. This will help support the team’s more advanced measurements with the drone, spectrometer, and other equipment, as well as the data analysis and travel expenditures. The third way is to spread the word so that your friends and neighbors get involved as well.

Tedesco hopes the experience will be fun and compelling for everyone who takes part. When you see a snowflake through a microscope for the first time, “it’s a great moment of discovery,” he says. “Look at the snowflake—look at the size, look at the branches. Look how maybe one snowflake could be different from the other right next to it, and wonder why that happened….There’s so much hidden that can be discovered under your eyes.”