Which light scattering detector is best for me?

Determining which gel permeation/size exclusion chromatography (GPC/SEC) system is best for your needs can be a daunting task. Even after you’ve decided to include a light scattering detector to obtain absolute molecular weight data you’re still left to choose between two options: a multi-angle light scattering (MALS) detector or a right angle and low angle light scattering detector (RALS/LALS). Both light scattering configurations will provide the absolute molecular weight of a sample but utilize different approaches toward that common goal. Fortunately, Malvern Panalytical offers both; the modular SEC-MALS 20 unit that can connect to OMNISEC, the TDAmax, or other third party systems, and an integrated RALS/LALS detector in the OMNISEC and TDAmax all-inclusive GPC/SEC systems. In this post, I will discuss the MALS and RALS/LALS detectors and hopefully provide the relevant information that allows you to determine which configuration is best for you and your application.

A MALS detector typically employs anywhere between three and twenty detectors arranged at various angles around the sample flow cell. A 90° detector is usually included, and the remaining detectors can range as low as 12° and as high as 168°. A MALS detector makes measurements of scattered light at a variety of angles, fits the data to a model, and extrapolates back to 0° to determine the molecular weight of the sample.  If the sample is an isotropic scatterer, then each data point will represent the same scattering intensity and the extrapolation back to 0° will be a flat line. If the sample is large enough to display angular dependence, then the differences in scattered light intensity based on angle of observation will become apparent. Both examples are shown in the partial Zimm plots below.

The RALS/LALS detector arrangement is comprised of 90° and 7° detectors judiciously chosen because of their complementary nature. For samples 10-15 nm in radius and smaller the 90° detector is ideal because it is situated at a right angle to the incident beam, which maximizes the signal to noise ratio. Since smaller samples scatter light with the same intensity in all directions, the RALS detector offers the ideal response for a direct measurement of a sample’s molecular weight. For samples with a radius larger than that 10-15 nm range that displays angular dependence, the LALS detector provides a measurement at 7°, which is the lowest detector position available. The placement at 7° means the detector is essentially taking a direct measurement of the sample’s molecular weight and avoids the need for any fitting and extrapolation. It’s important to note that the LALS detector is accurate for samples of all sizes, however, due to the lower intensity of scattered light provided by smaller, lower molecular weight samples the RALS provides a cleaner signal due to its orthogonal placement to the incident light source.

To determine the most appropriate light scattering detector for your needs you’ll need to consider your application, the information you’re seeking, and your personal preference. Both MALS and RALS/LALS detectors have advantages and disadvantages that may make them better suited for one situation or another, but the good news is they can both be counted on to provide accurate results!

For example, if your main analysis target is a relatively large sample of high molecular weight, both the MALS and RALS/LALS detector configurations are designed to handle the entire range of molecular weights present in your sample. However, if you’re primarily interested in analyzing small, low molecular weight materials, then a RALS detector will be able to handle the majority of your analyses. Having a complementary LALS detector will ensure that any large fractions of your sample, or potential aggregates, are observed accurately, even if they exist in low concentration within your sample. A MALS detector can determine the correct molecular weight, but since all detectors will observe the same intensity of scattered light for the small, isotropic scattering samples, getting the same result many times over can potentially become redundant.

The above example is often the case for scientists studying proteins. Due to the ordered nature of their structures, proteins are relatively dense molecules, which means that even high molecular weight species are comparatively small. Even proteins with molecular weights as high as 700 kDa only have a radius of 10-12 nm. The potential for high molecular weights but relatively small molecular sizes means proteins are typically isotropic scatterers and are ideal samples for a RALS/LALS detector. In this case, the RALS detector would be the main detector used for calculations, with the LALS detector picking up aggregates or larger components in the sample. Since proteins are generally isotropic scatterers, there is no added benefit of having the numerous detectors at various angles included in a MALS detector. 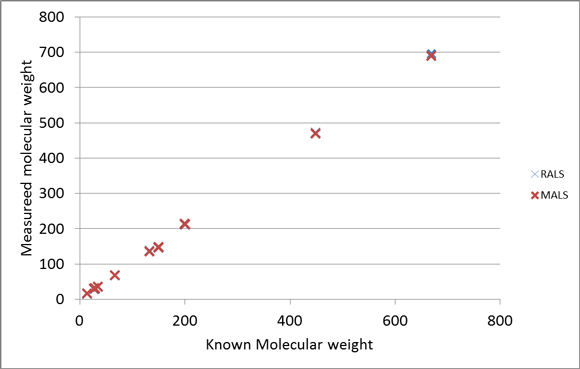 If you’re not only interested in molecular weight but also molecular size, then a MALS detector offers the ability to calculate a sample’s radius of gyration (Rg). However, there is a caveat: this is only possible for samples with a radius larger than 10-15 nm, as the Rg is calculated from the slope generated by angular dependence in the partial Zimm plot. If the sample is an isotropic scatterer, then there is no slope and Rg cannot be determined. As an aside, the hydrodynamic radius (Rh) of samples down to a few nm can be determined by combining the intrinsic viscosity (IV) data from a viscometer detector with the molecular weight data obtained from a light scattering detector.

Furthermore, there may be some practical items to consider specific to your application. If you are integrating multiple detectors, particularly for UPLC applications, for example, the smaller flow cell present in the RALS/LALS detector may be beneficial. Alternatively, if you’ve previously suffered from contamination of a light scattering cell, you may find a particular cell orientation (such as the vertical flow cell in the SEC-MALS 20) to offer additional robustness and reliability.

Of course, personal preference is always a factor when deciding on a light scattering detector. Maybe you’ve always used a MALS detector and are more comfortable calculating molecular weights using a specific extrapolation model. Or maybe you prefer the simplicity and directness of the RALS/LALS approach for calculating molecular weight. Or maybe you’re working within a budget and want to maximize the value of your instrument.

I want to quickly comment on this last item since it’s something to which everyone can relate. The cost of these detector units scales according to the number of individual light scattering detectors present. In the RALS/LALS configuration there are two detectors; in the SEC-MALS 20, there are twenty. The prices vary accordingly. There is no practical downside to having the range of angles available in a MALS detector, but as discussed above regarding isotropic scatterers, the additional angles do not always provide additional information.

And while it’s not the most cost-efficient route, you can even have both MALS and RALS/LALS detectors on the same system, collect the data simultaneously and then decide which one to use for calculations during data analysis.

Hopefully, I’ve provided enough information in this post to help you determine if a MALS or RALS/LALS detector (or both!) is the best fit for you and your application. Whichever one you choose, we’ve got you covered!