Debye Screening – what is it?

In colloidal samples (and this spans the whole range from molecules in solution to particles in a dispersion) the movement of and forces between objects are often governed by the charge affecting neighbors. When we measure zeta potential (by electrophoretic light scattering), the determination of the effective charge of particles is really what is probed. In other words: zeta potential (or electrophoretic mobility) is a measure of how the charge of a particle/molecule is influencing the movement of another particle/molecule. The full potential as a function of distance describes how much a (probe) particle would be influenced by that charge. This will of course change with distance: a positively charged probe particle will “notice” the charge of another positively charged particle very much when it is close to the other particle – however, it will not “notice” it much when it is farther away. Physics describes this as the electrostatic potential falling off with 1/r or one over the distance between the probe and the particle. 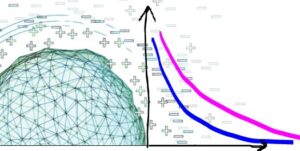 An interesting effect happens when the sample is changed by the addition of extra ions in the dispersion, this could, for example, be the presence of salt like NaCl. The salt ions (and there will be both positive [Na+] and negative [Cl-] ones) will arrange themselves around the positively charged particle. When there is a lot of salt, then many ions will tend to form a cloud of ions around the particle, and this will have the net effect of screening or weakening, the net charge of the particle. In the sketch, the blue scenario is for high salt, and the pink potential is for lower salt. This effect is named after Debye, and a specific characteristic length scale of this screening is the Debye length, which is the distance from a particle where the electrostatic force is significantly reduced (to 1/e). A buffer or solution with a high concentration of salt has a small screening length, a solution with only a few extra ions has a long screening length.

The presence of salt or other ions can, therefore, have a significant effect on the reach of electrostatic forces within colloidal samples.

Since the ions affect the electrostatic potential, this will be observable in the measurement of zeta potential, which is a measure of the strength o

f the electrostatic potential at the slipping plane. When more ions are added to a colloidal sample, the effective zeta potential will be reduced, as it is “shielded” by the presence of the counter-ions in the Debye-Hückel screening cloud. The reverse is true when reducing the presence of ions in a sample: the charge now reaches further and its net effect is stronger, resulting in a stronger zeta potential.

This effect can be observed in the data of Alumina particles prepared in different ionic strength of Lithium Nitrate LiNO3: The lower salt concentration (red dots) shows a strong zeta potential, whereas the high salt concentration (blue triangles) suppressed the observed values to be much closer to zero.

The above Debye equation indicates that the valence Z of the ions has an influence on the screening length: the larger the valence the smaller the screening length, i.e. the more efficient the ion is at screening electrostatic forces. Interestingly, when flocculation is the desired outcome and the ‘target’ zeta potential is near zero, the ions with larger valence are then able to affect flocculation earlier, that is at lower concentration. As stated by Malcolm Connah and Rolf Nitzsche in an older Zetasizer manual:

Multivalent ions are particularly important. Their effect on the screening of the surface charge is related to the counter-ion valency. The flocculation concentration for divalent counter-ions is on average about 100 times lower than for monovalent ions, and for trivalent ions about 1000 less. This is known as the Schulze-Hardy rule and is the explanation for the use of Aluminium [Al3+] or Ferric [Fe3+] ions to cause the flocculation of particles with negative zeta potential in water treatment plants.

In electrophoretic light scattering, the raw data we obtain is the electrophoretic mobility (typically in units of μm/s per V/cm or shorter in μmcm/Vs). This can then be converted to a zeta potential, and a critical parameter in that conversion is the Henry function, also called F(ka) or F(κa), where a is the particle radius and kappa or k the inverse of the Debye screening length. There are two often applied limits to this conversion: the Huckel (or Hückel) approximation with F(κa)=1.0 for κa<~1 and the Smoluchowski approximation with F(κa)=1.5 for κa>~100. These two limits mean that the screening length is significant (Huckel) or the screening length is negligible (Smoluchowski). The latter case is often – but not always – applicable to typical colloids.

If you have any questions, please email me at ulf.nobbmann@malvernpanalytical.com. Thanks! While opinions expressed are generally those of the author, some parts may have been modified by our editorial team.