“It’s impossible to know what happens in the fog of war” said a former US Secretary of State.  But the scientists at Sandia Labs in New Mexico are working to fix that, with the help of a Spraytec laser diffraction system. 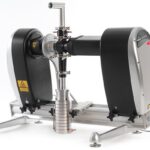 The Spraytec is used to measure the droplet size of the airborne droplets, to verify the fog being created is an accurate replica of what is found in nature.  By creating fog droplets with a known droplet size, fog environments are created that accurately replicate those found in specific situations.  Fog is of concern to national security and causes significant issues in defense, surveillance, reconnaissance, and security because it causes a loss of performance.  Just as fog challenges us while driving, it detracts from the performance of other vision and light-based technologies.  Using the Spraytec system, Sandia can create a representative fog for advanced testing of LADAR and other machine vision technologies in adverse environments.

A large diesel air compressor powers 64 spray nozzles spraying water to saturate the atmosphere in a tunnel.  Lighting is at a minimum, the air is cold and musty, and the exits are not marked.  Spending a morning working in a pitch-black tunnel, filled with thick fog, was creepy.  I could think of no better place to hold a Halloween party.