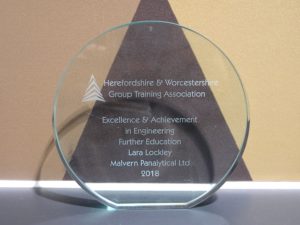 This was a special award for an engineering learner who has shown outstanding performance in the Further Education element of their apprentice training programme. This is the first year that this award has been presented and Lara was selected from all the engineering apprentices, across both Herefordshire and Worcestershire.

Lara began her apprenticeship with Malvern Panalytical in September 2016. She spent her first year at the Herefordshire and Worcestershire Group Training Centre where she learnt the skills of milling, welding, turning, CNC, PLC, wiring and CAD. 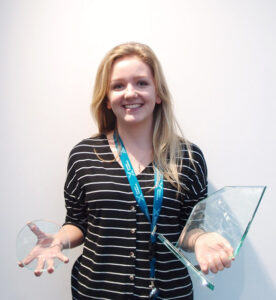 After she had completed her first year, Lara was then based at the Malvern UK office where she commenced her rotation programme which was her opportunity to learn all about our business. She first spent 6 months in Operations which was then followed by 6 months in Manufacturing Engineering. Lara is currently working in Sustaining with future rotations planned. After Sustaining, Lara will then move on to spend 6 months in Process and following that, 6 months in R&D, which will be her last rotation. When her internal rotation comes to an end Lara will then have a very difficult decision to make as she has to choose her preferred department to spend her final 12-month placement in!

Lara said she was very surprised to win the award.  She is extremely proud of all her achievements so far having also been awarded a D*D* (Double Distinction Star) which means she received a distinction in every unit of her course! Once Lara completes her HNC she plans to attend a university where she will study an engineering-based degree.

Lara’s tutor, Jill Mustard (Engineering Department Manager, HOW), had the following to say about Lara and her attitude to her apprenticeship:

“This apprentice is a pleasure to have in class. They are conscientious, polite, punctual and diligent. They have a natural ability and understanding but they use this to develop a deeper knowledge and are able to put things into Engineering contexts and situations rather than just learning things as separate subjects. Explanations are always clear and in depth, and it is very rare that they need resubmissions on any of their assignments. They are happy to help others understand too, rather than sitting back to watch them struggle.

A superb attitude to their studies and apprenticeship, a credit to themselves and their company.”

Congratulations Lara!  Well done to you!