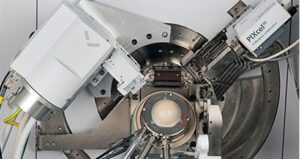 In our X-ray diffraction (XRD) Data Collector software there’s a little icon that shows a rotating arm and it takes over the screen when the diffractometer is moving into position. You have to wait for it to finish before you can issue the next command. In this age of high-speed electronics we expect everything to happen in an instant (well at least at the speed of the fastest electrons) and so, quite often we find ourselves drumming our fingers on the table waiting for the icon to stop. Sometimes in the excitement of setting up an experiment or getting the data from a measurement, we can forget everything that is actually happening for real in the diffractometer: the computer processing commands, the electronic transfer of data, the mechanical movements of the instrument, X-rays being produced, scattered and detected.

X-ray diffractometers such as the Empyrean are extremely complex and extremely precise instruments. The whole thing is really an amazing feat of engineering. In total they’re not very large, occupying a few cubic meters. But the precision on the components is worth thinking about. Something that is around 10 cm in size is machined to a precision within a few microns. That’s like saying that if you were building a 100-meter bridge you would have to get its total length correct to within 1 millimeter! They also have to be constructed so that they don’t bend or crack with stresses at different temperatures and for repeated movements. There are also rotations in the goniometer that are controlled to within a few arc seconds. An arcsecond is the angle that the hour hand on a watch moves in 1 second, try to imagine it!

This means that some quite heavy metal components must move on bearings that don’t stick or wear after years of usage, but which are also fit together so precisely that they also don’t wobble with respect to each other. Anything that is fastened together must be done so with materials that don’t loosen, warp, bend or wear. Clever and precise encoders are used to compare positions with respect to fixed reference points. Not only can positions be measured reproducibly down to hundredths and thousandths of a degree, but the instrument can be sent to stop at any position with the same precision. That’s real precision engineering indeed.

Then there’s the production of X-rays to think about: a generator that safely turns normal voltages into voltages that are 600 times higher than in normal use; tubes with electrons that are accelerated to bombard targets, to create characteristic X-rays; cooling systems to take away any excess heat, safety systems to make sure that X-rays can never spill out of the instrument enclosure. After that there are optics, slits, mirrors and sample stages that are precisely and repeatedly re-positioned and detectors now with the amazing power to count tens of millions of photons as they arrive one by one.

Sometimes the overall size of an instrument can lead you to forget that they are built with this extreme precision and care. It is this precision and quality that makes them so valuable. It takes decades for a company to build up the kind of expertise that goes into every component and decades for people to realize their skills in bringing these instruments to fruition before they are lovingly packaged and shipped to our customers.

It’s all quite extraordinary and there aren’t many instruments in the world that combine this form of spectral analysis with precise angular movements. We are growing accustomed to a world in which the only things that are moving are the electrons within our computers and gadgets.

As a user it’s easy to drum one’s fingers on the table and to ask: Why do I notice the time this is taking? But, in fact, when you consider every precision movement that the instrument is actually doing, a few seconds is actually a pretty rapid response.