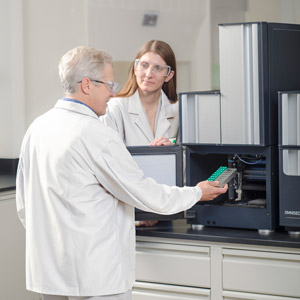 Gel Permeation / Size Exclusion Chromatography is the ideal technique for determining the molecular weight of macromolecules.  In addition to molecular weight, other molecular parameters can be calculated by taking advantage of various detector combinations, such as intrinsic viscosity (IV), hydrodynamic radius (Rh), radius of gyration (Rg), the presence and degree of branching, and many more.  With the availability of two concentration detectors, such as a refractive index (RI) detector and ultraviolet (UV) absorption detector, the concentration of two different components within a sample can be determined.  When working with polymers this method is often referred to as the copolymer analysis method, and protein users may be familiar with this as the conjugate analysis method.  When speaking about both, I use the term compositional analysis method as a general descriptor.

In this post, I’m going to describe how this process works, what is required from a hardware, sample, and information perspective, and discuss the application of this analysis method to different sample types.

The goal of a compositional analysis method is to calculate the concentrations of two components, A and B, within a sample.  The relative position of these two components is not important.  They can be covalently bound together in a random or alternating fashion, one grafted on to the other, as two linked blocks, two separate molecules, or any other arrangement.  Ultimately, what the compositional analysis investigates is not structural, it’s the amount of each component present in the overall sample.  This means that there are two unknown values: the concentration of component A and the concentration of component B.  If you think back to algebra class (I know, it was a while ago for me, too), when you were presented with a problem with two variables the only way to solve for them was by having two equations relating the two unknown values.  This same principle applies to compositional analysis and is the reason that two concentration detectors are required.

The above equations reveal some of the requirements of the compositional analysis method. In addition to having both RI and UV detectors, at least one of the samples needs to be UV active.  Both samples can be UV active, as long as they have different absorptions at a given wavelength.  Ideally, only one component is UV active, which would eliminate the other component’s dA/dc term.  The dn/dc and dA/dc values of both components must be known for the mobile phase and wavelength in use, respectively.  As with other GPC/SEC analysis techniques, the more information you have up front about your sample, the more detailed information you can obtain.  And last, the narrow standard used to calibrate the method needs to be UV active, so that the detector response factor and offset value for the UV detector can be determined.

The first example is a blend of polystyrene (PS) and poly(methyl methacrylate) (PMMA).  In this instance, the sample is a mixture of two homopolymers; the two components are not covalently bound or associated in any way.  After setting up the method using a narrow PS standard (UV active) and confirming the method’s validity by analyzing homopolymers of PS and PMMA, the blend sample was analyzed.

In the above chromatogram the RI signal is red, the UV absorption @ 254 nm is purple, the right angle light scattering (RALS) is green, and the viscometer is blue.  The most notable feature of the chromatograms is how different each detector’s response is.  The largest discrepancy is between the RI and UV signals, with the presence of a later eluting peak at 18 mL present in the RI chromatogram but absent in the UV chromatogram.

When the compositional analysis method is applied the calculated numbers indicate the sample is 51.10 % PS, and thus 48.90 % PMMA.  But those numbers don’t provide information on how the PS and PMMA are distributed throughout the sample.  For that level of detail, a plot of the concentration of each component is needed. 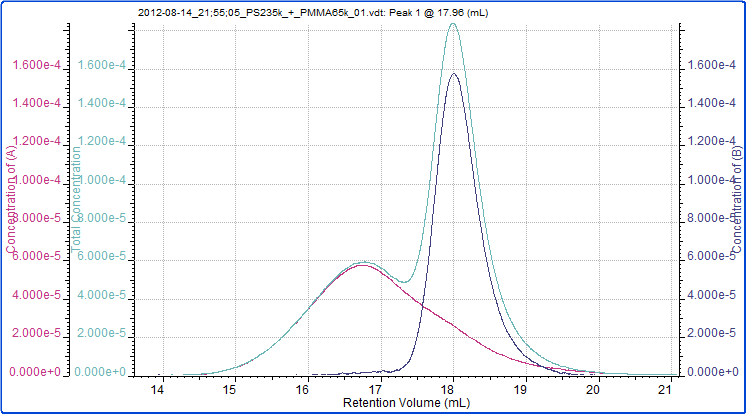 The plot above displays the concentration of PS (magenta), PMMA (dark blue), and the total concentration of the sample (light blue).  From this figure, it’s clear that the larger peak eluting from about 14-19 mL is PS, while the narrow peak at 18 mL present in the RI signal but not UV signal is comprised of PMMA.  This result makes sense with the raw data observed as well; PS is UV active while PMMA has a negligible UV absorption.  Therefore, the entirety of the UV response is from the PS, whereas the RI responds to both sample components.  By applying the compositional analysis method, the sample can be deconvoluted and analyzed comprehensively.

The second example is a protein-PEG conjugate, in which a PEG moiety is covalently bound to a protein molecule.  The compositional analysis method was set up using the bovine serum albumin (BSA) monomer as the standard.  As with the PS standard above, BSA is UV active and thus an appropriate standard for this type of method.

In the above chromatogram, the RI signal is red, the UV absorption @ 280 nm is purple, the RALS is green, and the viscometer is blue.  Aside from a small aggregate peak that shows up most strongly in the light scattering signal between 7.5-8.0 mL this sample consists of a single distribution, in contrast to the previous example in which there were clearly two different species present.

When the compositional analysis method is applied the calculations indicate that the sample is 47.49 % protein and 52.51 % PEG.  As there is only one peak in the chromatograms, it’s even more difficult than the previous example to elucidate the distribution of each component. 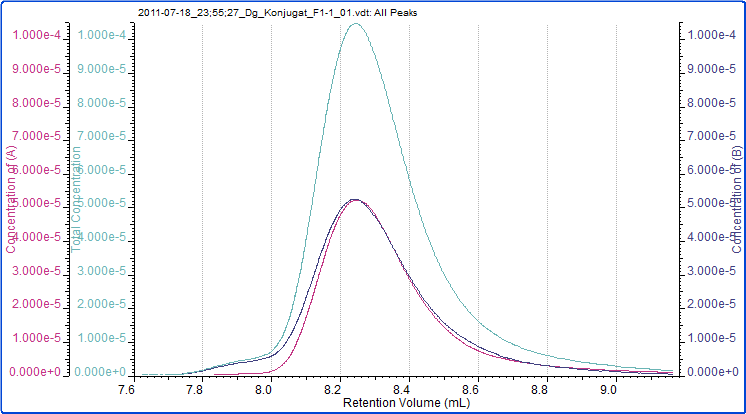 Plotting the relative concentrations of each component (protein is magenta, PEG is dark blue), along with the total sample concentration (light blue), shows that the protein and PEG components are pretty evenly distributed throughout the entire sample.  The only part of the sample comprised of predominantly one component is the earlier eluting aggregate, from 7.8-8.0 mL, which is essentially all PEG.

Identifying different components within a sample can sometimes be relatively easy, such as the PS and PMMA blend example in which each component leads to a unique detector response, but more often it is difficult to discern that there are even two different components present at all.  The power of the compositional analysis method lies in the fact that the software can deconvolute the relative concentration of two components, even if they have similar distribution profiles, such as the protein-PEG conjugate example.

Video demonstrations of the compositional analysis method being applied to the copolymer analysis of a polymer blend and the conjugate analysis of a protein-PEG example, including corresponding demo data with which you can practice, can be found by clicking on the respective links and images below.  Pretty soon, you’ll be able to set up this type of sophisticated analysis method to fully characterize your own multi-component samples!