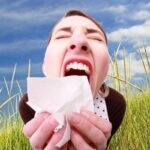 Bless you! As summer begins the sound of sneezing usually starts to ramp up as the misery for those that suffer from allergies begins.  If you are in the UK this year, for now at least you may not be suffering quite so much as the temperatures for end of June are sitting below average whilst the rainfall is considerably above average.

Now is generally the time of year where those who do suffer reach for medication to ease their symptoms of sneezing and a runny, stuffy, or itchy nose caused by allergies. This might well be in the form of a nasal spray containing corticosteroids as their active ingredient. Over the last 20 years several nasal products have become available to help relieve and ideally prevent symptoms. With a desire for cheaper health care, generic alternatives are entering the market as patents expire or in some cases are challenged, offering a wider choice.

When it comes to releasing a new product to market, traditionally a generic company would need to run a clinically meaningful endpoints study to demonstrate that their product works in the same way as the innovator – to show that it is bioequivalent.  Such a study measures how a patient feels and functions, as they monitor changes in their Nasal Congestion. At least 3 batches each of innovator and generic product must be tested at least 10 times, thus 60 samples in total. Participants provide a score over 15 days indicating the level of nasal congestion they experience on a scale of 0 to 3, where 0 = no symptoms and 3 =severe symptoms. Such a trial is time consuming, very expensive and arguably leads to subjective data.

The FDA does offer alternative in vitro routes to the clinical endpoint study, where a series of analytical measurements can be made to demonstrate bioequivalence (BE). For nasal sprays the required analyses include: Globule Size Distribution which can be determined using Malvern Panalytical’s Spraytec, Rheological behavior, which is measured by Kinexus, Morphology that can be measured by Morphologi 4 and Polymorphic Form that can be determined using Raman spectroscopy on the Morphologi 4-ID.

However, one of the key required parameters, is the Particle Size Distribution of the drug particles within the formulations. Until relatively recently this has been a significant challenge and could only be performed by manual microscopy and a very experienced analyst. Such a measurement was very time consuming and subjective and therefore hard to validate.  From the image below, you can see there are particles that are clearly excipient (circled in yellow) and some larger active particles that are quite easy to distinguish (circled in green), but as you consider smaller particles it is much harder to be sure (such as those circled in red). 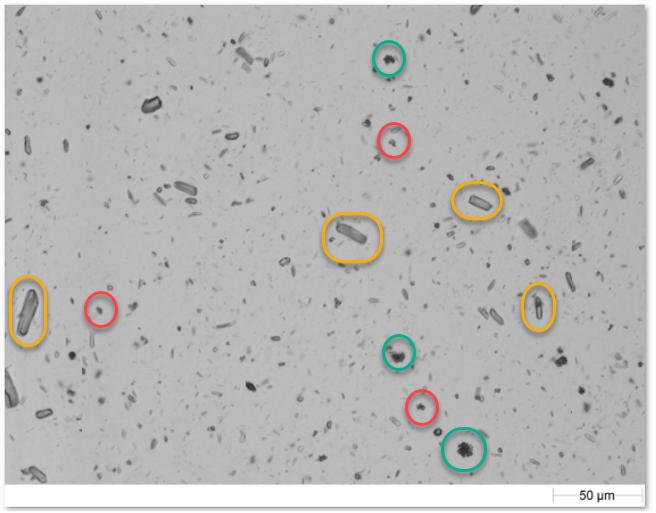 In 2016, a breakthrough was made and the FDA recognized the use of MDRS in establishing in vitro bioequivalence. Dr. Bing Li, Acting Director Office of Generic Drugs wrote in an FDA/CDER SIBA chronicle that “Apotex used data from an in vitro approach utilizing innovative technology… called Morphologically-Directed Raman Spectroscopy (MDRS).” She went on to say that “Successful use of this technology sets a precedent to accept an in vitro approach in lieu of a clinical endpoint BE study” and “FDA is very happy to have approved an application that included this innovative technology just four years after it became available. This shows our inclination to embrace emerging technology…”

Since then two draft FDA guidance documents for nasal sprays products (with the active drug ingredients Triamcinolone Acetonide and Fluticasone Propionate) have been updated and offer the possibility for submissions to use an alternate approach to the comparative clinical endpoint study stating “If drug Particle Size distribution in the Test and Reference products can be accurately measured using a validated analytical method such as morphology directed Raman spectroscopy or any other advanced methodology.”

Further, earlier this year, a regulatory note was released that describes approaches for validating the MDRS method.

You can find out more about Characterizing Nasal Spray Suspensions for Regulatory and Scientific Purposes and a toolset of physicochemical analysis techniques which are increasingly being applied to complex generic formulation development by watching our recorded webinars. You can also find out more about one of our customers who uses MDRS for assessing the particle size distribution of the active in nasal sprays here.