This year again, we are taking part in the annual Dragon Boat charity regatta. On Sunday 7th July, our teams will take part of this new edition!

It can’t often be said that when it comes to water activities too much water is a bad thing, but that was the situation we all found ourselves in for the first round of training. After days of heavy rain, the Severn swelled and broke its banks to the delight of the local swans who had a greater area to play in, but to the detriment of the Boat 2 crew captained by the ebullient Irina Stan. Despite her determination and enthusiasm to get out on the water the first session had to be cancelled for safety reasons; the water level was so high there was barely four feet between the water and the top of the arches of the Worcester Bridge and debris had been washed downstream and was caught around it. 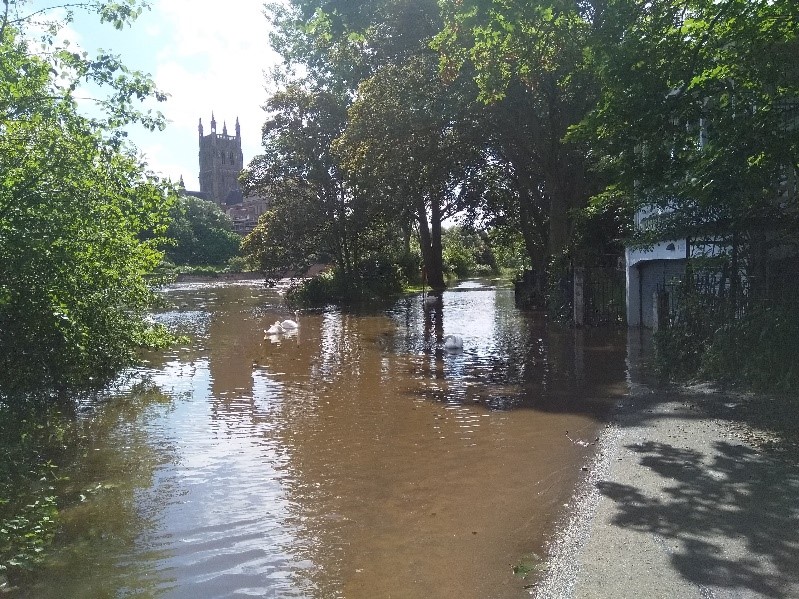 The boathouse, with Worcester cathedral in the background. Normally there are a flight of steps down to the river! 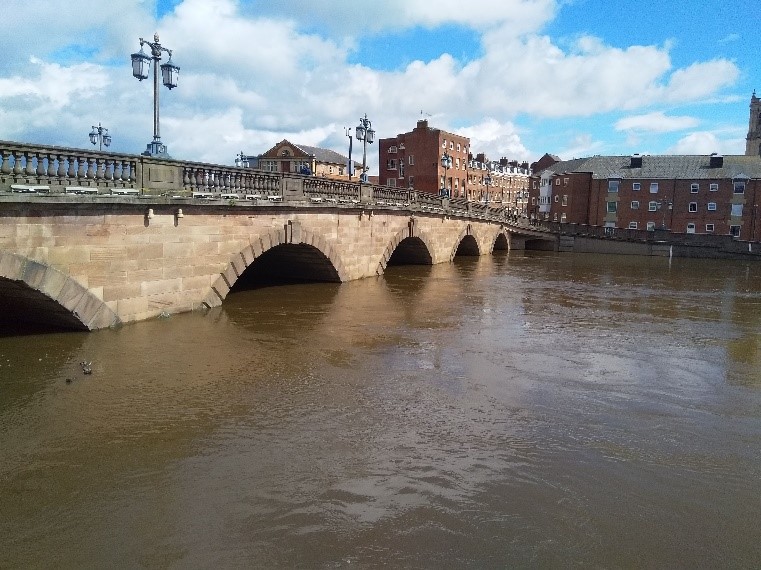 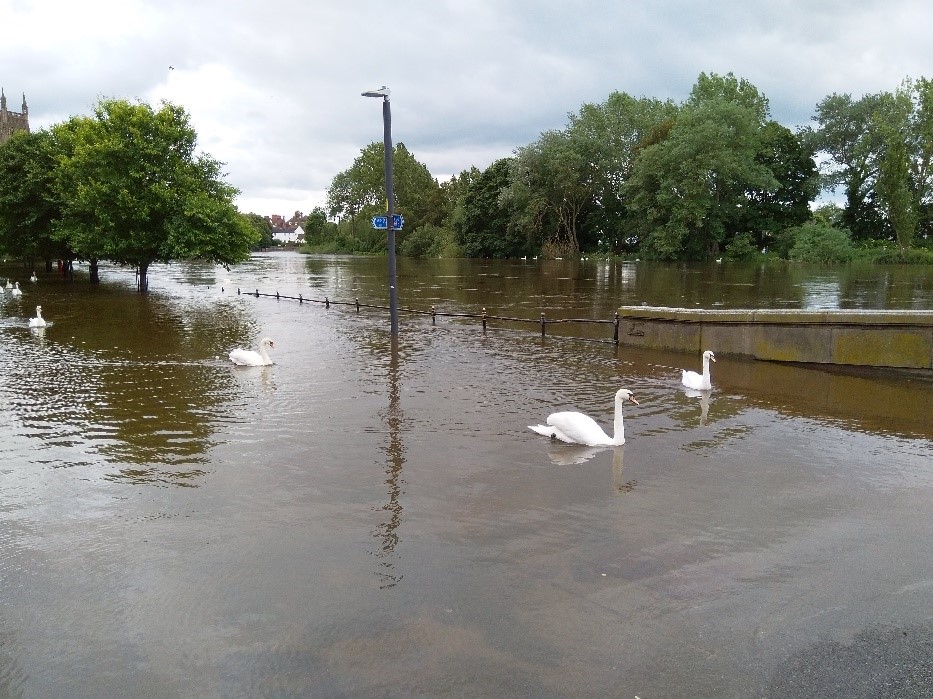 …but the swans were happy

A few days later and the water level had subsided enough to allow Boat 1’s training session to go ahead, captained by the indefatigable and seasoned captain extraordinaire Caroline Finch. Both crews this year feature many fresh faces who have yet to earn their Dragon Spikes, mostly from our ensemble of Year-in-Industry students and apprentices, and the first day of training can be quite a daunting and overwhelming experience. As always though our crews were eager, enthusiastic and ready to get out there.

It may look like you’ve just got to get in and paddle as fast as you can, but the only way to be fast is to work together as a team and that means mastering the technique and then even more importantly the timing. Everyone moving as one, guided by the drummer. Needless to say, enthusiasm isn’t always an alternative to experience and with such a high number of new team members it was always going to take some time to get right. As Boat 1 set off from the launch, with the river still high and fast moving, it was clear that some experienced hands would be needed up front where the pace and rhythm is set. Unfortunately, those experienced hands were sitting behind the front row, and so began the somewhat precarious process of swapping the rowers in rows 1 and 2 while out on the water. This was especially unsettling for new drummer Kessigen, who was sat at the front of the boat on a tiny seat and experienced every rock and sway as the rowers swapped position. With a changeover as slick as anything seen in Formula 1 (!) Boat 1 was back on its way, helmed, steered and expertly coached as ever by a member of the Worcester Dragon Boat Club, and the crew put through a steep learning curve with only a few dozen inadvertent splashes and crew soakings.

The fine men and women of Boat 1 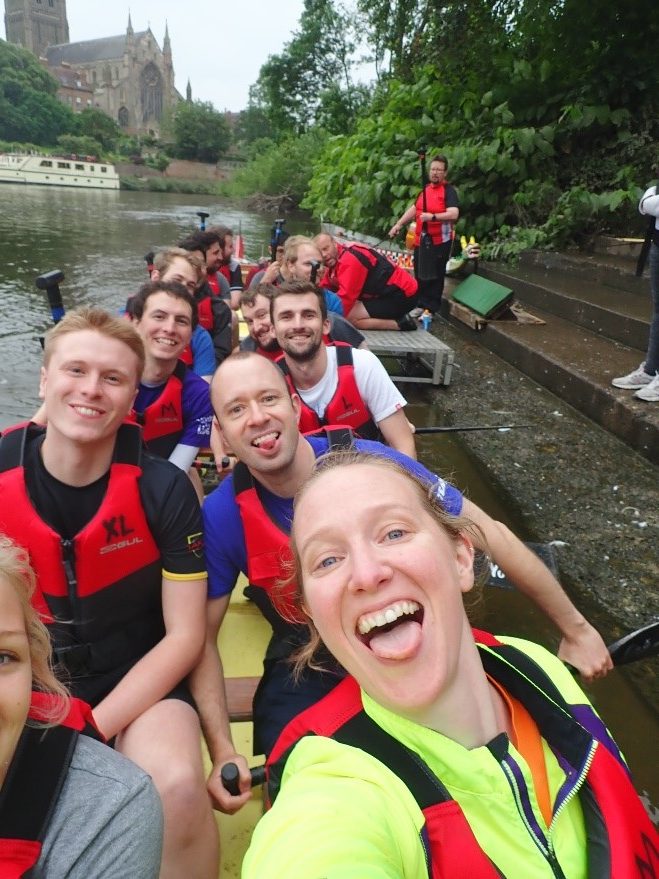 It’s not all hard work!

The following week and the river was mostly back to normal, but still moving fast and with the occasional crocodile/large branch flowing downstream: while it was likely the latter, no crew was brave enough to check! 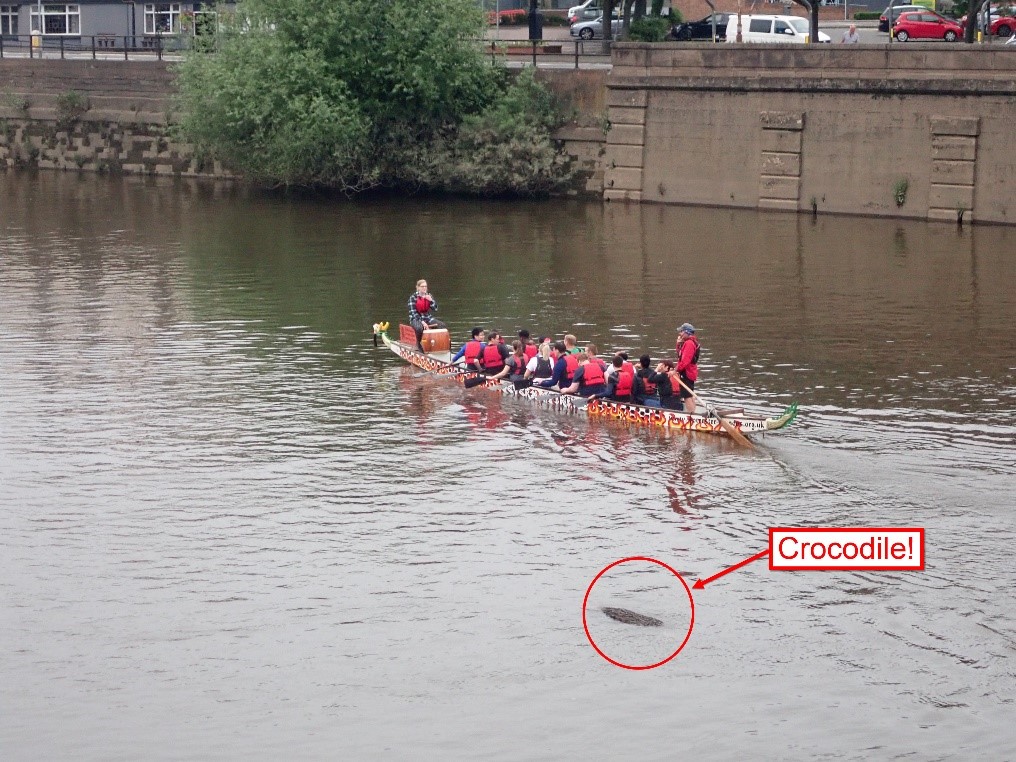 Both crews would be out in the water this day. Boat 1 took advantage of having more experienced crew members and drummer Rebecca Bennett, and tested their racing starts and pushing themselves through 4 dummy races up and down the course between Worcester Bridge and the rail bridge viaduct. On race day the races are upstream, because apparently having nature help and making things a bit easier is no fun! As Boat 1 pulled in, Boat 2 was pulling out for their first practice, comprised of many new faces. Being the first time out on the water there was a certain nervousness in the boat particularly for the coach at the helm, who after the first few strokes out gave the impression that he may dive off at any moment and swim home. However, after learning that the crew was new and Captain Irina setting a reasonable expectation for what the crew was aiming for, the coaching concentrated on that key factor: timing. Like the best sporting film montages the training began, and the crew came together. With spirits high amongst the team two in the boat were particularly proving their ability. Joana da Silva and Tom Dennison quickly got to grips with the paddling and were noted for how they had improved from the start of the session and are definitely new members to look out for. New drummer Beth Galtry also quickly got into things and gave the team the support and motivation they needed via the medium of shouting and banging the drum! One session in, and this team of new paddlers were getting bitten by the Dragon bug! 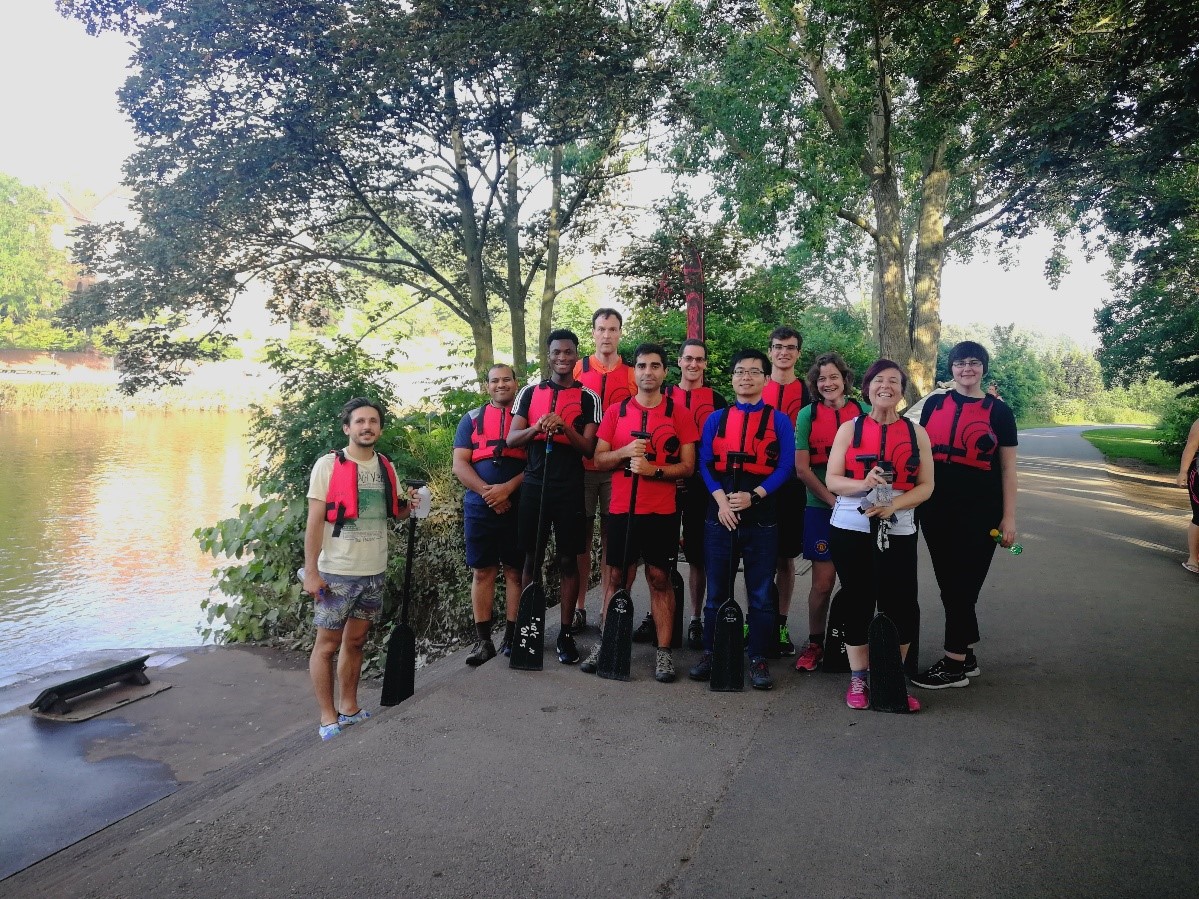 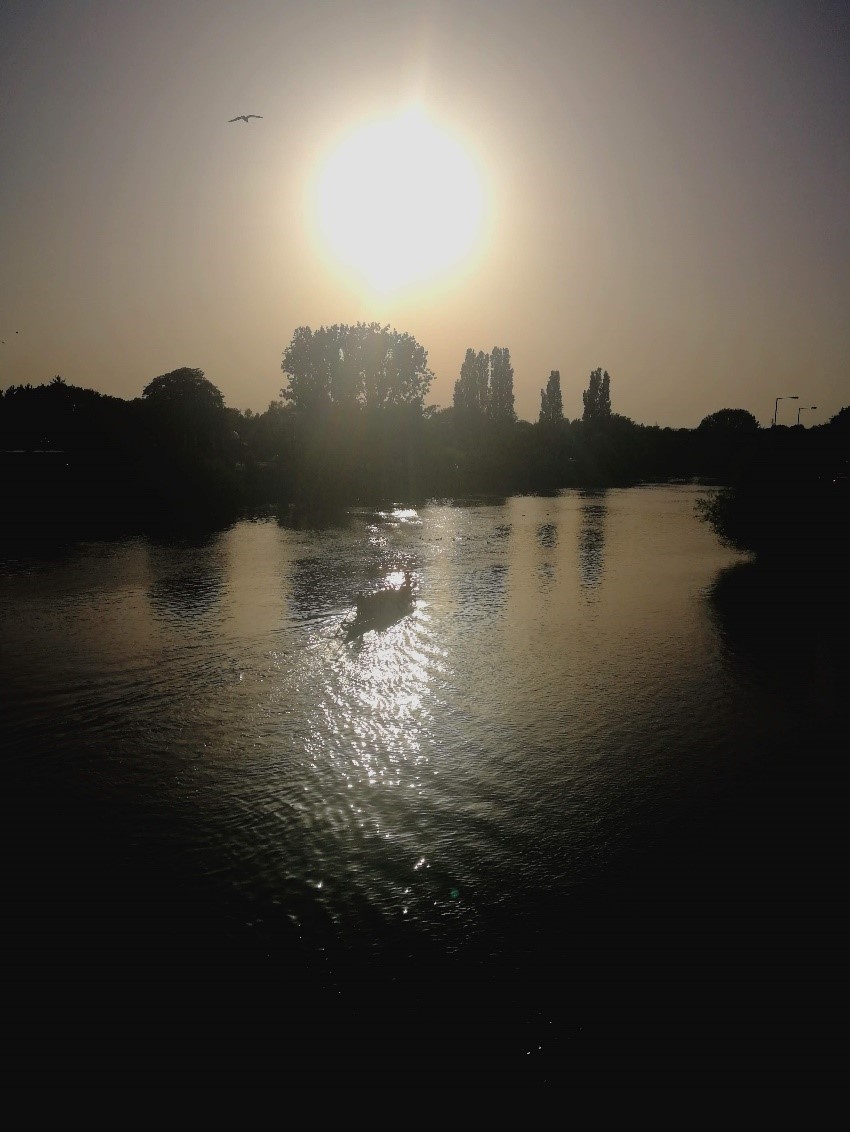 A beautiful evening to be on the river

Boat 2 got their second training session at the end of the week. Overcoming the aching limbs from the first practice only a couple of days before, and with the temperature hotting up, the crew gave up their normal Friday night activities for a good hard paddling session on a glorious summer evening. In an attempt to improve the team’s timing and flow, the coach devised a slightly unnerving training plan. While the helm safely steered the boat, the crew were encouraged to paddle with eyes closed so that the timing and feel of the action would be more instinctive, using only the drum beat and the noise of the paddles in the water to guide them. In this zen-like state the team could feel the pull of the water on the paddle, feel the boat move with the stroke, and feel the gallons of river water splashed around because they were paddling with their eyes closed. Persevering in the face of, well a face-full of water, this unconventional approach actually started to work! 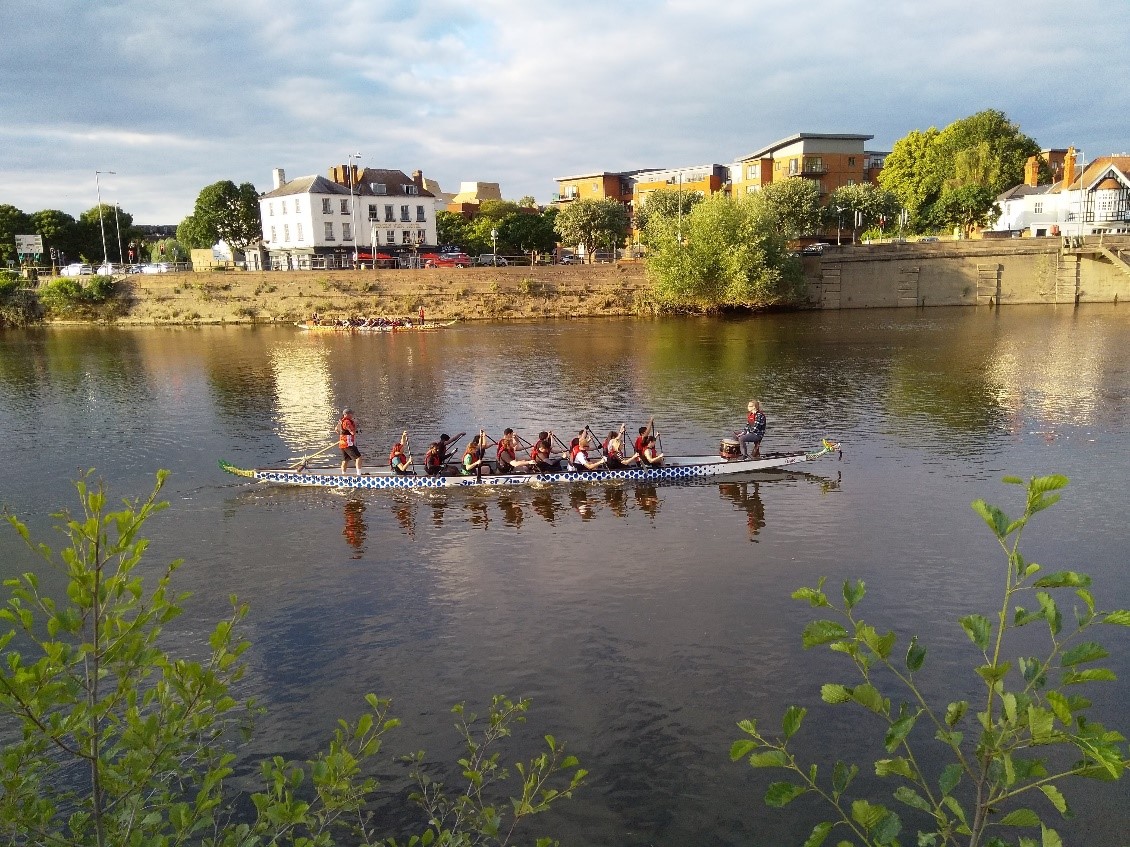 Boat 2, about to put on the pace

With under a week till race day, both crews faced their final training session. Boat 1 was again practicing starts and dummy races along the course, focussing on working out the team’s timing for the actual competition. Boat 2 was working on bringing the team’s competitive side out of them. With encouragement and guidance from the coach the boat managed to knock 5 seconds off of their best race time, an astounding achievement.

And so, with only three sessions each, both crews were now prepared and excited for the event itself, and ready to fearlessly face down the competition.

What will happen? Who will emerge victorious? Find out, in the post-race blog!

Thanks to Malvern Panalytical for supporting and sponsoring the teams, and to the Worcester Dragon Boat Racing Club for hosting the event.