Malvern Panalytical’s ASD TerraSpec® Halo mineral identifier is being used as part of today’s space race to return astronauts to the Moon, Mars, and beyond! The full-range (350-2500nm) portable spectrometer was recently selected and used in multiple research projects aimed at expanding U.S. efforts in planetary exploration. Dr. Ulyana “Uly” Horodyskyj was involved in co-teaching an adult continuing education program, “Planetary Field Geology and EVA Tool Development.” The course was held by Project PoSSUM (Polar Suborbital Science in the Upper Mesosphere), a 501(c)(3) astronautics research and education program studying our upper-atmosphere and its role in our changing global climate. 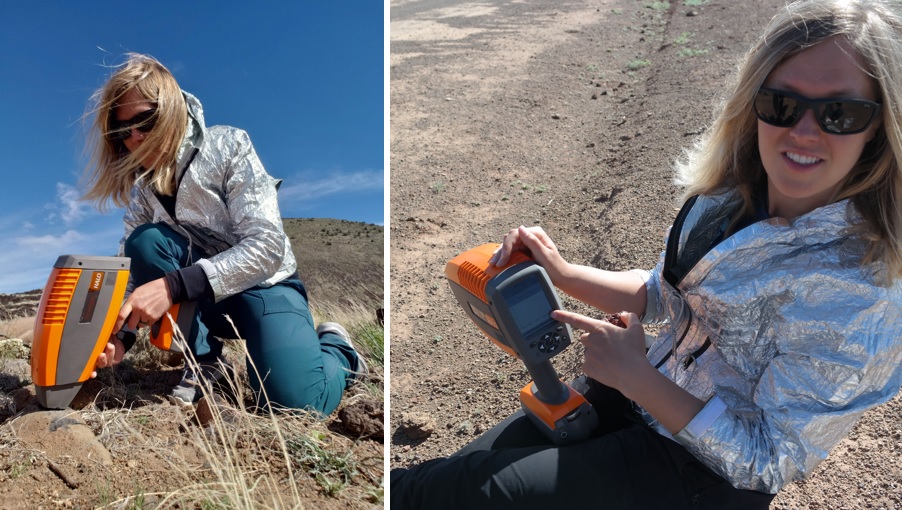 Dr. Ulyana Horodyskyj demonstrates use of the ASD TerraSpec Halo

The Project PoSSUM program utilizes scientific procedures to drive technology maturation, and this course taught surface geology to twelve PoSSUM citizen-scientists who came from all over the world to learn procedures and develop tools that will influence the design of EVA space suits. Class participants had the assignment of coming up with a concept of a field tool that they were to design and have 3D printed or otherwise assembled; additionally, standard geologic tools such as rock hammers, rock kits and hardness tests were involved. It was Uly’s suggestion to incorporate and include the use of the ASD TerraSpec Halo VIS-NIR-SWIR (visible – near-infrared – short-wave infrared) spectrometer in the teaching of the course, as the instrument can measure the spectrum of rocks and identify alteration minerals, which are key for when scientists and astronauts eventually do get back to the Moon and/or go to Mars, and are looking for traces of water.

“With NASA ramping up to go back to the Moon, to Mars and beyond, there is a need for people to be well versed in planetary field geology. Use of the TerraSpec Halo to identify alteration minerals is a great way to do analog testing on Earth, before committing to future missions to the Moon and Mars.“ – Uly Horodyskyj The course culminated in a one-week capstone field experience at the San Francisco Volcanic Field in Northern Arizona; this location was selected as areas of the volcanic field have been used by NASA for testing techniques for exploration in a simulated extraterrestrial terrain environment. The ASD TerraSpec Halo instrument was provided on behalf of Malvern Panalytical as part paid rental / part sponsorship.

“The ASD TerraSpec Halo is like a tool out of Star Trek. The students – some college, but the majority post-docs and beyond – had some experience with mass spectrometers and spectroradiometers, but nothing like the use of this ASD mineral analyzer before. The ease of use of the instrument, and the software, was amazing. The battery life of the spectrometer was incredible. In my teaching, I was able to point out absorption features to the students, as the TerraSpec Halo shows you not just minerals, but also the measured spectrum; I was not familiar with some of the alteration minerals that came up on the instrument’s screen, so the students and I would look this up together, which proved to be a good learning opportunity for myself as well.” – Uly Horodyskyj

Rather than using mechanical rovers or replica Mars instrumentation, GHOST utilizes human “rovers” and off-the-shelf field portable instruments to isolate the variable of the scientific decision-making process. This eliminates the need for mission-specific instrumentation, communication and data relays, or complex engineering requirements, while still providing the same basic information, such as mineralogy.

During the research project, the TerraSpec Halo allowed for rapid data acquisition of in-situ outcrops, similar to the data gathered by Mars rovers, and allowed the rover operations team to rapidly traverse the field site near Salt Lake City, Utah, maximizing the number of data points gathered.

“Full range spectroscopy provides a wealth of compositional information and is a valuable tool in planetary exploration. The use of the ASD TerraSpec Halo, and field-portable VIS-NIR-SWIR, as an analog for rover instrumentation was sufficient for science team operations; the teams were able to efficiently conduct their site investigation and analysis of operational methods using terrestrial analog instrumentation.“ – Brian Hynek

Why is this research important?

Mineralogical variations are significant because geochemical differences contain clues regarding whether a geologic environment was habitable or capable of preserving evidence of prior life. Without in-situ VIS-NIR-SWIR data, there could be missed critical information for scientific missions and interpretations. The selection of the ASD TerraSpec Halo for these research projects to measure compositional information represent some of the initial steps towards advancing scientific study and exploration of Mars.

“The best we can do, at the moment, is study extreme environments on Earth that are going to be the most similar to Mars. Places like Iceland, the Atacama Desert in Chile, these volcanic fields in Arizona… these are excellent analogs where you cannot only test the equipment but also look at these markers of weathering and presence of water. If we find something similar on Mars, we know what the Earth equivalent is – we can match it and we know exactly what that geochemical history is.” – Uly Horodyskyj

On the same subject: