When I use PEG in my liposome formulation, the zeta potential will decrease to zero but the system will remain stable. How do you explain this?

Increasing the mole percent of covalently bound PEG groups on the particle surface shields the polar heads in the external lipid bilayers and thus hinders the electrostatic interaction with the buffer. Thus, the zeta potential becomes less negative to the point of a plateau when a monolayer of PEG is formed.

Can you quantify the different percentages liposomes that are bilamellar, unilamellar, and multilamellar by SAXS? Do the Braggs peaks relate to concentration/quantity?

Roughly estimating the percentages of liposomes with different lamellarity is possible by fitting a linear combination of simulated SAXS profiles corresponding to the scattering from liposomes with various numbers of lamellae in the stack. The coefficients of the linear equation that gives the best fit to the experimental data relates to the abundance of the corresponding species. If you would like more information about this, please contact your local helpdesk.

Where can I find more information about the characterization of solid lipid nanoparticles?

You can find a number of resources in the reading list at the bottom of this article.

When measuring size with the Zetasizer, why is the peak size different from the average size?

The Z-average is an intensity weighted mean for the whole sample from Cumulants analysis, this will be different from the distribution analysis, where the peak size values are coming from. For a perfectly monodisperse sample, the z-average is often very close to the peak size, only 0.1- 0.2 of a nm different, and this difference is due to the differences in analysis algorithm.

For mixed particle samples, multiple populations are observed in the distribution analysis graphs (example shown below). In this example, you have two distinct population sizes with the Z-average calculated falling in between the two peaks. The Z-average is shifted towards the larger peak as the DLS technique is intensity weighted, hence a small amount of larger material (that scatters a lot more than the smaller population) will push the Z-average to a larger value than the main peak, as it is a mean size based on scattering intensity and similarly – a smaller for example buffer component peak will pull the Z-average to a slightly lower value. As a result, there differences between the Z-average and the peaks reported can be observed. Listed below are possible scenarios where this can occur.

Explanations for the three potential scenarios are:
1. z-average smaller than peak size: The cumulant fit only is to the initial part of the correlation function, so in a way, slightly overemphasizes the initial decay from the smaller part of the distribution. If there is an additional peak at small size due to additives or buffer components (sometimes called a “solvent peak“) this could be the cause for the average size lower than the expected peak size.

3. z-average larger than peak size: The distribution shows a small and a large component, the average of the two is somewhere in between. Under peculiar circumstances, there may actually not be a smaller or a larger peak when the smaller peak is smaller than the lowest display cutoff (buffer components or additives) and when the largest peak is larger than the large cutoff (very large aggregates or dust).

What is the DLS resolution and can it be improved?

While Dynamic Light Scattering (DLS) has a wide working size range from ~1nm to ~10µm, it is considered a low-resolution sizing technique. The rule of thumb resolution limit for single angle DLS is 3 to1 on the particle size, meaning that in order to resolve near-in-size components by DLS, they must differ in size by a factor of 3. The underlying reason for this limitation is the inability to distinguish random noise in the correlogram from real effects associated with weakly scattering particles, such as low concentration protein oligomers or particles in the region of a Mie minima.

Traditional NNLS algorithms compensate for this by blurring the peaks in the particle size distribution, thus the low resolution. In comparison to historical single angle DLS measurements, there are 3 fundamental improvement to multi-angle DLS data collection integrated into the new Zetasizer Ultra systems:

1. Adaptive Correlation – reduces noise in the measured correlogram, by measuring for shorter run times and isolating correlograms that are not statistically identical

In combination, adaptive correlation reduces the experimental noise, multi-angle correlogram collection enhances sensitivity to particles in Mie minima regions and optimizes sensitivity across the entire DLS size range, and high-resolution NNLS reduces inherent polydispersity. This offers a higher resolution intensity distribution, 2:1 in comparison to 3:1 for single angle DLS, and increased confidence in the mass/volume and number distribution transforms for particles below 500-700nm in diameter.

Can you give an example in literature where varying amounts of cholesterol incorporated into liposomes affect zeta potential?

Liu et al measured the zeta potential of PC vesicles incorporated with various amounts of cholesterol.  They measured liposomes comprised of Phosphatidylcholine, Vitamin E, and Cholesterol  (PC: Vit E: Chol) ratios of 4:1:0, 4:1:2, and 4:1:4 and found the zeta potential became increasingly negative with values of -14.1 ±0.8, -17.9 ±1.1, -20.6 ±0.7 respectively at 298 K.  They believe that the cholesterol in the bilayer reduces the surface binding affinity among the cations in the buffer solutions and its bilayer surface.  When the same measurements were performed at an elevated temperature of 310 K, they found the zeta potential became less negative suggesting the hydrophilic headgroups become more hydrophobic at higher temperatures.  Their article goes on to cite other references that corroborate their results.

Can a modified form of liposomes called “Transferosomes” which are used for medicated electronic tattoos be further utilized for dermatological disorders like Psoriasis?

There are several articles that discuss the use of transferosomes for dermatological disorders such as Psoriasis.  Let’s first define the term, TRANSFEROSOMES.  This refers to proprietary drug delivery technology based on liposomes.  This was designed to exhibit characteristics of a cell vesicle suitable for controlled and potentially targeted drug delivery.  Many articles show the use of these Transferosomes or other liposome-based systems for psoriasis.  A simple google scholar search of “transferosomes + psoriasis” yields over 400 results.

Can liposomes be effective in site-specific delivery of hydrophobic drugs?

Yes, there are over 140,000 papers that discuss encapsulation and release of hydrophobic payloads. Hydrophobic drugs are encapsulated in the lipid bilayer and then delivered to specific sites by functionalizing the liposomal surface with targeting ligands. 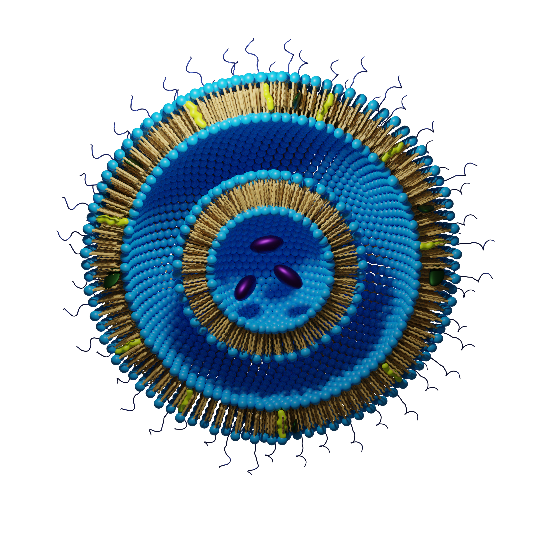 What is Q1 and Q2 bioequivalence? Why is this important?

What impacts liposome stability? Can methods such as freeze/thaw cycles improve stability and what impact does this have on encapsulation capacity?

The nature of liposomes makes them susceptible to stress conditions such as changes in temperature and pressure. Freeze/ thaw cycles along with, (or followed by) other preservation techniques such as freeze-drying or spray-drying can be used to maintain liposomes. The freezing part of freeze/thaw cycles is particularly important for effective preservation of samples. It is during the freezing stage most water is converted into ice, with the size of the ice crystal determining stability. In the thawing phase the size of these ice-crystal can impact stability, with the potential of leaking hence impacting encapsulation efficiency.

If you would like to know more about liposomal stability, along with how to develop a high-throughput freeze-drying method to improve stability and longevity of your formulation then consider this article by Hussain et al (2019). This paper discusses improvements of liposome stability without impacting encapsulation efficiency of protein.

Do you need to dilute your liposomal formulations when using Dynamic Light Scattering?

The ideal concentration range for the Zetasizer Instrument Range is between 1E8 – 1E12 particles/mL. Depending on the concentration of your liposomal formulation(s), you may need to dilute your sample. To find the concentration range in which your particles are stable and within range for the Zetasizer, we recommend serial dilutions using the same medium to get meaningful measurements. It also reduces the risk of multiple scattering caused by high concentrations, whereby light scattered from one particle is then scattered by another particle before being analyzed. This reduces the apparent particle size when compared to the true nature. Furthermore, one of the ways in which Malvern Panalytical has been able to extend the upper concentration limit is by using a patented technology referred to as Non-Invasive Backscatter (NIBS) technology (please see technical note for more information). NIBS enables the most accurate results especially for samples on the fringes of the concentration range.

What is Multi-Angle Dynamic Light Scattering and the added benefit of this feature?

Multi-angle dynamic light scattering incorporates the information from several angles to combine into a single size distribution,  An added feature of Multi-Angle Dynamic Light Scattering (MADLS) is improved resolution of up to 2:1 when measuring particle size, for mixed particle samples. As we have the MADLS feature, the Zetasizer Ultra (Red range) can also determine the actual concentration of the formulations in particles/mL. Another benefit of the Zetasizer Ultra is the ability to measure samples using a Low Volume Disposable Capillary Cell (LVDSC, ZSU1002). Very little sample volume is required (3 µL minimum) to perform high-quality size measurements while avoiding the impact of multiple scattering and thus effectively extending the upper size limit for the Zetasizer Ultra.

How can we determine batch-to-batch consistency for liposome production?

A detailed knowledge of the liposomal formulations including the physicochemical properties (such as size and heterogeneity) can help with regards to batch-to-batch consistency. Having detailed knowledge of the formulation with regards to these characteristics, normal operating ranges, and parameters enables consistent production between batches. Established manufacturing protocols and measurements between batches can help you identify possible changes that can occur during production. Malvern Panalytical’s Zetasizer range allows characterization during early development process. Also available is the at-line Zetasizer AT instrument that supports characterization during manufacturing, so you can produce and spot any batch-to-batch inconsistencies.

How do you determine the stability of a protein encapsulated inside the aqueous core?

The molecular weight, size, and polydispersity of protein can be measured using the Zetasizer in static light scattering mode. When encapsulating an API or protein it is important to check if the protein’s structural integrity and functionality is preserved for the formulation to be successful. These characteristics should be determined pre and post encapsulation to identify changes. For more information on this please check the application note for protein characterization as well as a number of orthogonal instruments that can be used to characterize proteins and encapsulation efficiency.

Thank you to all attendees and to everyone that that submitted questions.

Don’t miss Maryam and Ragy’s next webinar on 11 November, How to scale liposomal formulations for large-scale production: From benchtop to GMP manufacturing